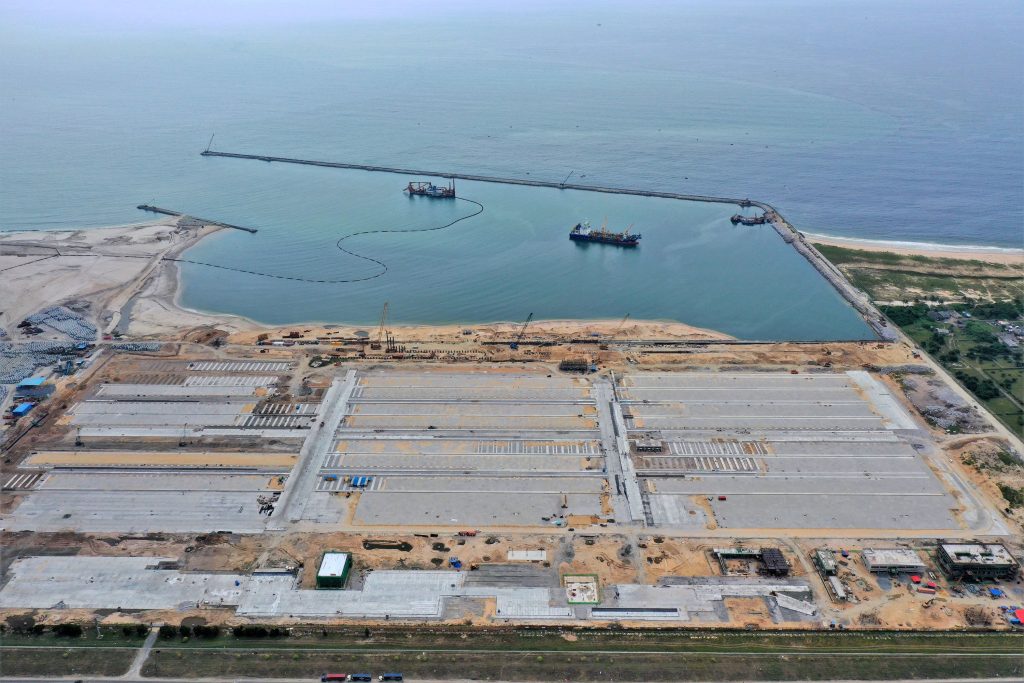 Barring all unforeseen circumstances, the $1.5 billion Lekki Deep Seaport, In Lagos State would officially be inaugurated by President Muhammadu Buhari in January 2023.

This is according to the Lagos State Governor, Babajide Sanwo-Olu, while addressing the bi-annual Non-Oil Export Summit held in Lagos.

He promised also that the state government will continue to provide the space and opportunities for businesses to thriv.

He said that work on the Lekki Deep Seaport had been completed and that the project would be inaugurated by the President in January 2023, to finally provide enormous opportunities for exporters to ply their trade and improve the export earnings of the country, especially in the non-oil sector.

He urged stakeholders to continue to promote a public-private partnership that will drive growth.

Already, the landlocked countries of Chad, Mali and Niger Republic have indicated interest of routing their cargoes through Nigeria, when the the Lekki Deep Seaport begins operation.

What You Need To Know About The Project

The development of Lekki Deep Sea Port has been conceptualised on the basis of a significant gap in projected demand and capacity. Market studies indicate that the demand for containers is expected to grow at a CAGR of 12.9% up to 2025.

However, given the expansion constraints on the existing infrastructure, the capacity in Lagos is incapable to meet the growing demand. The capacity shortfall for container terminal facilities in Lagos is projected to be 0.8 million TEUs in 2016 going up to 5.5 million TEUs in 2025. The strategic location, flexible and optimised layout and modern facilities provide Lekki Port a distinct competitive edge over any other port facility in the West African region.

In addition to bridging the capacity deficit, Lekki Deep Sea Port will have significant positive impact estimated at USD 361 billion over the term of concession. It is expected to contribute more than USD 200 billion to the government exchequer and create close to 163,000 new jobs. Furthermore, Lekki Port will spur the economic development around the Lekki sub-region and the wider Lagos State through rapid industrialisation.

The Project enjoys a development structure that is first of its kind in Nigeria. This is the single largest private investment in infrastructure in Nigeria being developed on project finance basis with majority of financing being raised internationally. Success of this project will pave the path for further foreign direct investment in the country in the infrastructure sector.

Benefits Of The Free Trade Zone

Lekki Port also enjoys a whole host of benefits since it has the license to operate as a Free Trade Zone entity under the NEPZ Act.

The Police in Enugu, has arrested a herbalist after allegedly shooting his client.

The incident occurred at Umuaram community area of the State.

The state Police Public Relations Officer, Daniel Ndukwe, in a statement, said 16 other suspects were arrested for various offences ranging from conspiracy, armed robbery, abduction, car snatching, unlawful possession of firearms among others.

Emmanuel, after committing the crime, was arrested after the case was reported to the Isi-Uzo Police Division.

According to Ndukwe, the suspect, during interrogation, confessed to have used a locally-fabricated single-barreled gun to shoot and kill Benedict at his shrine in Umuaram community, while testing the gunshot protection charm he had prepared for him.

“The gun has been recovered, while further investigation is ongoing at the Homicide Section of the State Criminal Investigation Department Enugu,” the PPRO said.

He also added that two firearms, one live cartridge, three mock guns, a Sino truck loaded with 789 bags of cement, mobile phones, ATM Cards, pieces of wrappers, clothes and other incriminating exhibits, were recovered from them.

Zenith, Others To Determine Interest Rate On CVFF