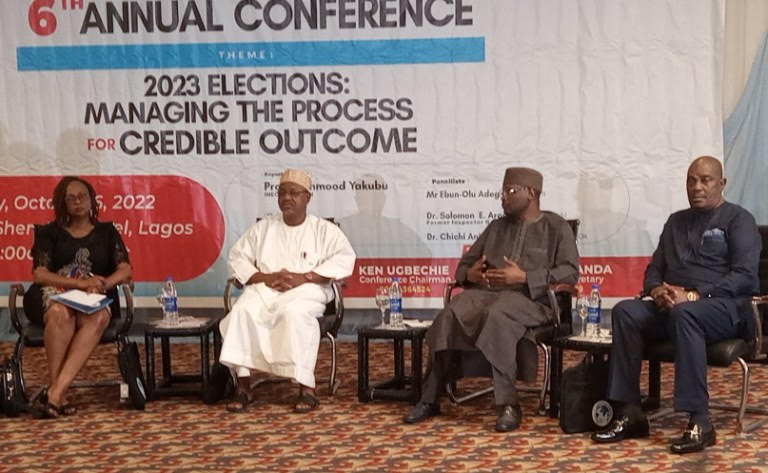 Former inspector General of Police (IGP), Dr Solomon Arase, has outlined some challenged that posed threats to the smooth conduct of elections including the one in 2023.

Arase, who runs a law firm and is also a security consultant and trainer, gave the hints as a panelist at the 6th edition of the Annual General Conference of the Guild of Corporate Publishers at the Sheraton Hotel in Ikeja, Lagos, Thursday, October 6, 2022.

The expert mentioned the issue of conflicting laws on rallies, saying whereas the Public Order Act debars the police from stopping public protests and processions, the Electoral Act Section 91 (1-4) mandates the same police to monitor and control political rallies.

The ex-IG said this puts state Commissioners of Police in dilemma, requiring them to think outside the box and act creatively in such ugly situation. He said some political parties prefer to rush and fix their own rallies when they hear that their opponents fixed theirs, thus causing propensity for clashes that would need the intervention of a police commissioner in the face of laws stopping the same police commissioner from stopping rallies.

He said the Electoral Act set aside sensitive roles to the police from pre-election to election proper and to post election periods.

On outcry by political parties that the winner of an election rigged it, the Super Cop said all of them try to manipulate elections especially in areas where a party had advantage.

Arase mentioned another challenge as manpower crisis whereby many policemen are drafted to protect very important personalities (VIPs). He wondered where the police would get enough manpower to man the elections across the land.

He also pointed at ‘non-state actors’ he said had taken over security space across the country, saying they would pose a big threat during elections.

He reminded Nigerians that all security agencies participate in elections but it is the police force that has overall responsibility. He thus wondered what would happen where a security officer is higher in rank than the highest ranking police officer in a particular location in terms of command. He said these matters needed to be resolved ahead of the elections.

Arase who retired on June 21, 2016, said he has just concluded training of over 600 police officers for election duties.

He thrilled the large audience when he tried to show how politicians show desperation at elections. He said President Muhammadu Buhari had called him and the chairman of the Independent national Electoral Commission (INEC), Prof Mahmood Yakubu, and gave strict instructions that on no account should police assets be put at the disposal of any political party.

He revealed how some politicians still went ahead at night to beseech him to transfer some 11 officers in a state where election was about to hold and to replace them with a list they showed him.

Arase said he was surprised that persons who were not at the small meeting knew what the President said. He however said he only deployed the Commissioner of Police for his own good but got the other 10 officers to sign an undertaking never to tamper with any aspect of the election. He said he let them know the order from above.

Trouble however came to him when the election did not go the way of the politicians that gave him a list, and they got to know why their preferred police officers could not act. “They went and reported me to Mr President that I was not working for their party”.

The President, he noted, did not bother with them because he (Arase) was carrying out his instruction.

Arase called for prosecution of electoral offenders, saying it is only in Nigeria that such offenders get away.

Arse stated who thanked GOCOP for giving him the platform to discuss elections and security called for what he termed institutional synergy on election between the media, civil society organizations and INEC”.

He went on: “Those managing communication desks of the police during elections must be professional about it and mind what to say. Using inciting statements by a police officer such as ‘we will blow their heads off’ is dangerous.’

He said there more crimes in the USA and UK than in Nigeria but the difference is that the offender there is sure of being prosecuted, always.

Reacting to the matter of prosecution of electoral offenders, the INEC chairman put the blame squarely on the legislators who he said cleverly put the task on INEC. He wondered how iNEC was asked to prosecute offenders when it did not have the power or the manpower to carry out arrest and investigation needed for prosecution.

His words: “There have been several recommendations for setting up of electoral offences tribunals to try offenders but they have not been set up.”

Prof Yakubu however said there is hope because some National Assembly members have sponsored private members bill on electoral tribunals and that INEC has gone to lend support.

Dr Chichi Aniagolu-Okoye of Ford Foundation lent her support for prosecution of electoral offenders and said the 2023 elections would make or mar Nigeria.

In her welcome address, the President of GOCOP, Maureen Chigbo, publisher of RealNews said the 2023 elections would be very important to Nigeria and that INEC was very important in what happens in 2023.

She used the opportunity to explain the critical roles of the online publishers and the huge efforts to sanitise the online space. She called on corporate bodies to support GOCOP in this task by doing business with GOCOP members instead of blackmailers.

She revealed that with induction of 13 new publishers, GOCOP now has 94 corporate members.