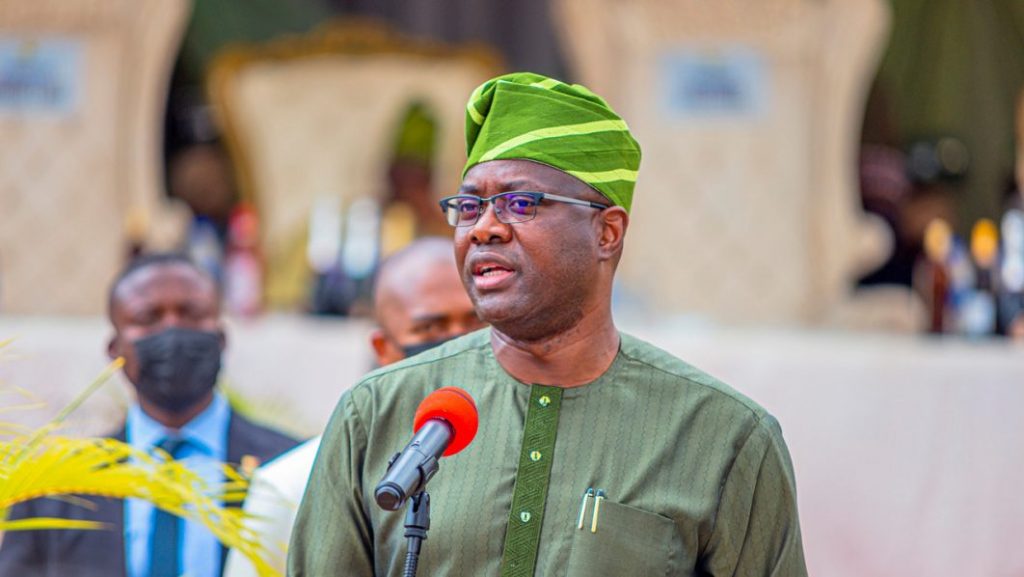 Oyo State Governor, ‘Seyi Makinde, late on Saturday, reeled out his administration’s scorecard of projects executed within Ibadan metropolis, saying that he has contributed immensely to the growth of Ibadanland and the apex socio-cultural group, the Central Council of Ibadan Indigenes (CCII).

The Governor, who made the declaration during an event hosted by Ibadan Social-Cultural Clubs, where he was conferred with the title of Aare Jagunmolu of Ibadanland, said that he always take the interests and peace of Ibadanland into consideration before taking decisions in government.

A statement by the Chief Press Secretary to the Governor, Mr. Taiwo Adisa, indicated that the governor, while speaking at the Emeritus Professor Theophilus Ogunlesi Hall, UCH, Ibadan venue of the event, recalled that before he assumed office as Governor, he had donated up to N120m to CCII from his personal purse.

Makinde, who noted that his administration has, in the last three and a half years, delivered projects that have helped reposition the city of Ibadan and the entire state, explained the vision for his second term campaign slogan, Omituntun 2.0, declaring that if re-elected, he would concentrate on efforts to make the developments already recorded sustainable.

Speaking on the Ibadan Traditional institution, the governor stated that he was not opposed to ideas of reform to the institution, but that such reform should emanate from the Olubadan-in-Council and the Kabiyesi and not from the government.

He added that whatever reforms the Council and the Olubadan resolves to bring to the government, he will endorse.

He said: “I like to greet everyone here today and say a few things to set the record straight.

“So, there is no doubt that I believe in the cause of CCII and Ibadanland. I am a proud son of Ibadan and that is why anything that has to do with CCII or Ibadan, I take it with all the seriousness it deserves.

“Since 2011 to date, I have contributed immensely to the organisation. Since I started working as a young man, I have been interacting with the presidents-general of the CCII and have been contributing my own quota.

“When we got into government, we met the issue of Ibadan Tradition Institution, which was knotty and a campaign issue, and my position then was that when something is not broken, you don’t have to fix it.

“The traditional system of Ibadan, which we met on ground, as of that time, was not broken, and even up till now. But to the glory of God, we resolved the issue and the system is back firmly on track.

Makinde equally said that his administration has improved Ibadan and Oyo State in general, saying: “In terms of governance, there are many significant initiatives that this administration has undertaken to improve Oyo State and Ibadan in particular, and the successes in those projects are already recorded in the book that has been made available to everyone here.

“When we were campaigning, our team had an accident on Akufo Road and I promised the people that we would fix that road, if I am elected as governor. Today, the road is at around 80 per cent completion, and it is the first concrete road in the whole of Oyo State.

“I told our people that the majority of our projects will target and expand our economy, and Ibadan Airport is one of them.

“This airport has been bringing in money through regular flight operations. So, it is a matter of time; with the interventions the state government is making at the facility, including the building of 500,000 litres aviation fuel storage and dispensary, the number of flights will soon expand along with connectivity, enabling us to fly. Very soon, we will be able to fly to other destinations in Nigeria.

“Also, the Airport Road is being dualised right now and at almost 70 per cent completion.  By the end of the year, I am hopeful that we will open the dualised Ibadan Airport Road.

“Well, we have renamed it Dr. Omololu Olunloyo Road, in honour of a worthy Ibadan son and former Governor of our dear state, and we have done so many other projects that time may not permit me to mention.

“Across the major pillars on which this administration is rested upon, Ibadan has benefitted from those activities. The last thing I will talk about is the Ibadan Circular Road. If you go to both ends of the road, you will see that work has begun on the interchange.

“If you are going towards Osun, after Badeku, you will observe that work is ongoing there as well. The other four bridges are not also left out, and in terms of investment, the project is the largest single investment that has come to Oyo State in, at least, 50 years.

“Right now, the government has committed 10 per cent of the resources that will be needed for the project and that is well above N30bn.

“So, in terms of volume, it is a project that will be worth more than N300bn. When we complete it, it will change the landscape of Ibadan.

“Those who reside around the Akobo axis can testify to the fact that the second bridge we did on that axis was magical. It is the same magic you will see when we complete the first phase of Ibadan Circular Road. And what this means is that all the trailers and articulated vehicles coming into the inner part of Ibadan to destroy our roads will not be plying the routes again.

“When the express road is completed, they will be using the routes so that we can fix our inner roads, including Oke-Adu, Beere, Molete and others.”

Earlier, the President-General of CCII, Chief Yemisi Adeaga, lauded the governor for contributing a lot to the growth and development of CCII even before he assumed office, adding that Engr. Makinde has always been a major sponsor of CCII activities.

He said: “First, I want to remind everyone here today that the governor loves the CCII. As a matter of necessity, once he calls on us, we need to respond positively.

“Second, when you talk about those who hail from Ibadan, who are in positions of authority and are doing well for CCII, our governor is one of them. I have said this because, so far, he has contributed a lot to the growth and development of CCII, being the major sponsor of the activities of CCII.

“He has equally given this organisation more than N100m. He is supporting us in the area of scholarship as well. Annually, he gives us at least N10m to organise the Ibadan Cultural Festival.

“But he has not only been supporting us, he has been participating in our programmes. He always makes himself available when we invite him.

“He made a promise when we held our inauguration event that he would intervene in the palace issue but because of the laws surrounding the matter, we have not been able to table the issue before him.

“Recall that, last week, we just concluded on it and he has promised that before the end of his tenure, the Palace will be completely built.

“Let me also use this opportunity to tell us that the governor has promised to fix the road leading to the secretariat of the CCII and we pray that God will continue to help him. We are not just praising him but thanking him based on what he has done and what we believe he will still do.”

Representatives of different Ibadan Socio-Cultural Clubs took time to shower encomiums on Governor Makinde for what they called his iconic and laudable developmental projects.