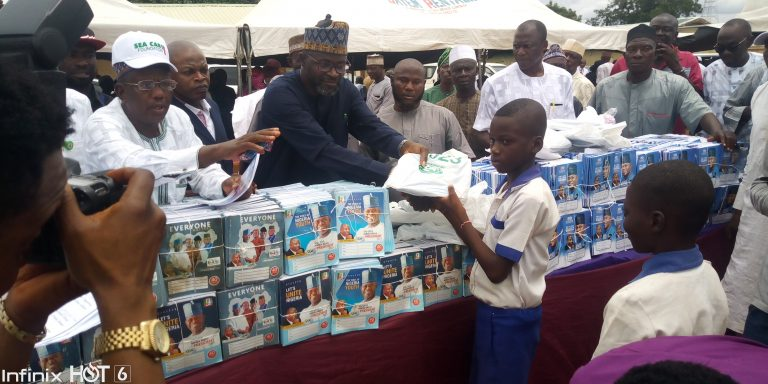 Speaking at the official launching of the distribution exercise at Holy Trinity School Lokoja, the Chairman, Organising Committee of the foundation, Al-Amin Ogejah, said the initiative was educational intervention programme of SCF to complement the loudable education programmes of Gov. Yahaya Bello.

According to Ogejah, the foundation is distributing 50,000 free exercise books and 15,000 pens to five local government areas of Kogi central as well as Lokoja, to complement government’s efforts at uplifting basic education in the state.

He said the first phase of the distribution would cover both public and private schools in Ajaokuta, Adavi, Okehi, Ogori-Magongo and Okene, and Lokoja Local Government Areas of the state.

He added that the second and third phase of the programme would take care of the eastern and western senatorial districts of the state, respectively.

The chairman called on well-meaning individuals and corporate organisations in the state to contribute to education and other sectors, saying the government could not do it alone.

He said that the foundation would in due course invest in agriculture, health, youth and women empowerment to better the lives of the people at the grassroots.

“This gesture is to complement the efforts of Gov. Yahaya Bello in education and it is a widow’s might to raise the hope of the less privileged in the society since our mission is to touch lives positively in the state,” he said.

In his remarks, the state Commissioner for Education, Science and Technology, Mr Wemi Jones, commended the founder of Sea Care Foundation for keying into Gov. Yahaya Bello’s agenda aimed at uplifting education in the state.

Jones called on influential people in the state to invest in education in order to complement government’s effort to take the sector to the next level of development.

According to him, when investments are made in education, the future of children are guaranteed , saying such investment has its reward beyond this world.

“Investing into our children is an investment that has its reward beyond this world. I am praying that God Almighty will replenish the pocket from where the funds of the project was sourced.

“Gov. Bello had shown sufficient passion and commitment to education, allocating 20 per cent of the state’s annual budget to education sector which is why a lot of development is happening in the sector since he came on board as the Executive Governor of the state,” he said

The commissioner said that stated that Kogi Government had fully enacted the education law , saying by the law, no school age children were allowed to hawk during school hours.

He added that the law also prohibited the operation of private schools in the state without registration with the ministry of education.

Also speaking, the State Commissioner for Health, Dr Saka Audu, appreciated the Chairman of the foundation, Mr Abdulrahim Sani, for investing in education, noting that the choice of the sector was timely .

A traditional ruler, the Ohi of Eganyi and Chairman Ajaokuta Traditional Council, Alhaji Musa Ochuja, described education as a sector that could easily effect development of any nation.

Ochuja appealed to well meaning sons and daughters of the state to contribute their quota to the development of basic education in the state.

He also commended the commitment of the Chairman of Sea Care Foundation for contributing immensely to educational development of Kogi.

The News Agency of Nigeria (NAN) reports that each pupil received five pieces of exercise books of 40 and 60 leaves, and a pen.

Two of the beneficiaries, Joshua Emmanuel and Enoch Ajayi, both in Primary six at Holy Trinity school, commended the foundation for the good gesture, and prayed God to bless them. (NAN)