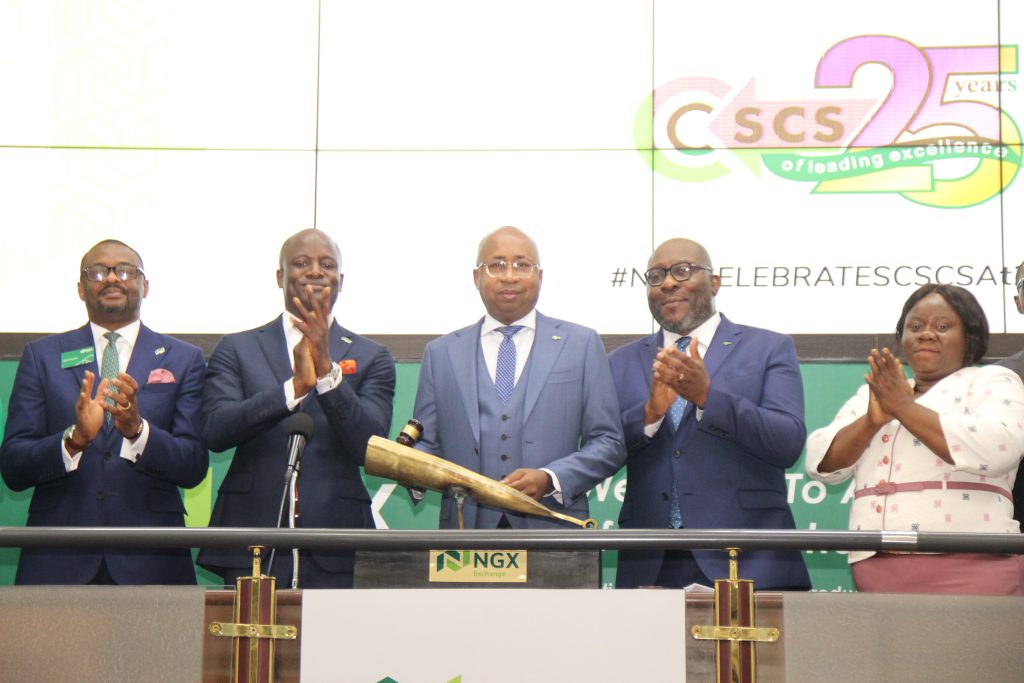 To further drive growth and development in the Nigerian capital market, Nigerian Exchange Limited (NGX), has urged the Central Securities and Clearing System Plc (CSCS) to further collaborate on synergistic initiatives just as it congratulated the firm on its 25th anniversary celebration.

NGX held a Closing Gong Ceremony at the Exchange House on Tuesday, 13 December to commemorate CSCS’s 25th anniversary and celebrate the long-standing cooperation between both entities. “CSCS as the depository, clearing and settlement manager occupies a critical position in the capital market,” said Temi Popoola, Chief Executive Officer NGX, while delivering his remarks. “Right from inception, CSCS and the Exchange have worked synergistically, driving up transaction volumes and boosting liquidity in the capital market.”

Popoola recognised CSCS for its support for NGX’s initiatives and commended the management led by Mr Haruna Jalo-Waziri for the company’s financial performance and creation of value for shareholders despite the challenging macroeconomic environment. “We understand that amidst the uncertainty and tough business climate, you have shown that you can propel the company to greater heights.

“On this note, we at NGX look forward to more cooperation especially as we aim to champion the next stage of the market’s development which will involve transformational technologies like Blockchain. We hope to continue sharing resources, working on strategies that will further deepen our market, attract the younger generation of investors and enhance wealth creation in the country.”

The CEO, CSCS, Mr Jalo-Waziri during his remarks recognised the efforts of the Exchange in starting the central clearing and settlements firm and structuring the company for consistent growth through its 25 years of existence. He also noted the contributions of the NGX CEO and suggested different ways by which both organisations could collaborate in the coming year. “We are optimistic that we can create more synergies to grow the market and create more value for the capital market and Nigerian economy,” Jalo-Waziri added.