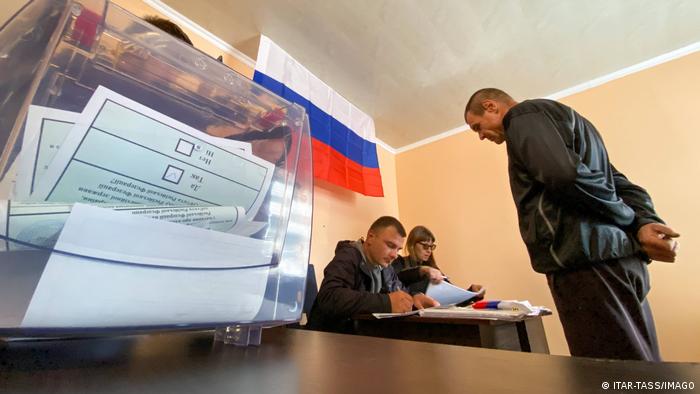 The European Union has proposed a raft of new sanctions against Russia in response to the so- called referendums in four Ukrainian regions.

European Commission President Ursula von der Leyen made the announcement, saying the package was designed “to make the Kremlin pay” for escalating the conflict in Ukraine with what she called “sham” votes in occupied territory.

It also features export bans on key technology used for the military such as aviation items, electronic components and specific chemical substances.

The sanctions package will map out the legal basis for an oil price cap and will ban EU citizens from sitting on governing bodies of Russian state-owned companies, von der Leyen said.

“We do not accept the sham referenda and any kind of annexation in Ukraine, and we are determined to make the Kremlin pay for this further escalation,” she told reporters in Brussels.

Von der Leyen: ‘We do not accept the sham referendum’

Speaking alongside von der Leyen, top EU diplomat Josep Borrell said individuals involved in organizing of the self-styled referendums and top officials from the Russian Defense Ministry would be subject to EU entry bans and asset freezes. He said the list of blacklisted individuals would also include anyone helping Moscow to circumvent sanctions.

Since Russia’s invasion of Ukraine in February, the EU has implemented six rounds of sanctions targeting Russian individuals, entities, good exports and technology and banking as well as an embargo on most Russian oil and coal exports.

The United States on Wednesday announced that it would provide Ukraine with another $1.1 billion (€1.13 billion) in military aid. That money will fund the purchase of roughly 18 advanced rocket systems, as well as other anti-drone weaponry.

The Biden administration said the funds will be provided under the Ukraine Security Assistance Initiative (USAI). The Department of Defense (USDOD) program facilitates the purchase of US military hardware to enable Ukraine to better defend itself against invading Russian forces.

The announcement comes as Russia seeks to annex large swaths of Ukraine after staging sham “referendums” that the US says it will “never accept.”

Wednesday’s aid brings the total Kyiv has received from the US since Joe Biden took office to $17 billion.