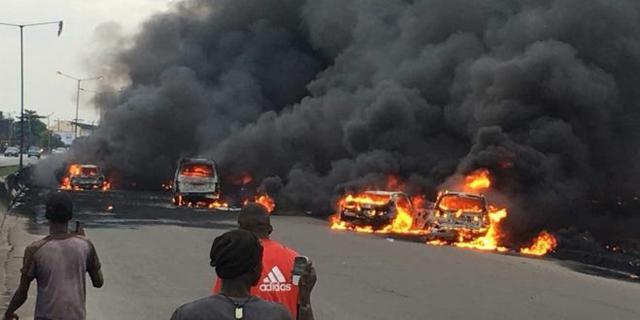 One person lost his life while 13 luxury buses and property worth several millions of naira were destroyed at New Tarzan junction at Ogidi, near Onitsha in a fire disaster.

Obinwa said that the unfortunate incident occurred at about 4pm on Sunday, Aug. 15, adding that the fire caused panic in the area as residents and motorists scampered for safety.

He said that preliminary finding by SEMA revealed that a tanker ladened with petroleum  product parked by the roadside was hit by an articulated vehicle resulting to leakage of the product which later got ignited.

According to him, some residents were scooping the leaked product from drainage channels when the fire which eventually wreaked the havoc started.

He said that an unidentified man died in the inferno while 13 Luxury buses belonging to a mass transit company were razed.

He, however, said that security agents were mobilised and the entire area cordoned off to avoid hoodlums taking advantage of the situation to loot property.

Obinwa, Executive Assistant, Media, to Gov. Willie Obiano on SEMA, disclosed that five fire trucks were immediately deployed to the scene as soon as the agency was contacted.

He expressed displeasure that some residents of the area were scooping the product before the fire started regardless of several warnings by the authorities. (NAN)