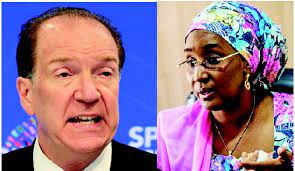 Housing sector investment expert, My-ACE China, popularly known as Mayor of Housing, has warned Nigerians including politicians and those in authority not to miss the upcoming opportunity to pull Nigeria back from the brink.

This is as he feared that the Nigerian economy may enter its worst stages in 2023 if the elections failed to meet the expectations of the masses.

China, who is behind latest estate developments in Port Harcourt including the Alesa Highland, spoke on the sidelines of the 6th Annual General Meeting of the Guild of Online Publishers (GOCOP) in Lagos.

The acclaimed Real Estate success strategist said what makes the 2023 elections different is that it has the biggest economic implication more than any other elections Nigeria ever had in its Nigeria. “This is because the levels of awareness and mass mobilization that have happened so far have pushed Nigeria to the brink; a situation that would either make or mar Nigeria. This is because people had never got so disillusioned before and had not lost so much confidence as it is now about where politics has gone on and where it has taken this country to.’

The Mayor of Housing went ahead to note that never in the history of Nigeria has election had such level of emotional investment, support or emotional capital.

To buttress his call for caution for the sake of the economy, China said economics can be reduced to two things; motion and emotion. “This looks at the motion of goods and services and the emotion of those propagating the goods and services.

“This is because many people do not appreciate the implication of emotions in politics, but there is a man that did some work on it, MK Kyle, author of ‘The Economics of Emotion’, who discovered that when people are emotionally confident, there is more motion of goods and services, but when people are gloomy or melancholic or down, there is less movement of goods and services.

“I come to a final conclusion that in an economic environment, in the economics of emotion, gloom is doom while bloom is boom. When people are in bloom, economy booms; when people are very gloomy, the economy goes into doom.”

According to the investor as well as property developer who wants to solve housing problems in Africa, for the first time in Nigeria’s history, the emotional capital of the 2023 elections is so high that if for anything that height of expectation is crashed, there would be gloom. And, anything that spells gloom at that scale will spell doom for Nigeria, not just as a nation but in all economic ramifications.

The Mayor of Housing rather advised Nigeria to build on what he said is happening, “Which is that for the first time, both the international community and individuals are so much aware of Nigeria’s 2023 elections. Expectations seem to be very high. We should thus make sure that this expectation is not busted.

Appealing that the glaringly popular candidate be not stopped illegally, the Mayor of Housing hinted that any economy that experienced boom has always had the participation of the Diaspora. “Dubai that reigns today had nothing but free trade zone and good tourism and a wonderful environment to do business. Guess what, boom boosted the perception.’

Digging deeper into the theory of emotions, China said in the 21st century, emotional perception of a product is more valuable than the actual quality of the product. “So, we are in a war of perception. The question would now be, who is the candidate perceived to be most popular in this election?

“We must all be careful how we handle this sensitive concept. So, the electorate, the INEC, the policymakers, they all must ensure that actual result agrees with what people think. Where this was not the case in the past, it had always led to violence and rioting. If the will and perceptions of the masses are allowed to decide the result, Nigeria will harvest emotional capital.

“Once the popular candidate emerges, even before he is sworn in, the amount of foreign direct investment (FDI), Diaspora remittances, etc, which would pour into Nigeria because of the belief in this popular candidate, will cause a boom.

“Even the expectation of the boom will even initiate the boom that will attract a lot of investments like the time when the late MKO Abiola appeared to have won in 1993. If we miss this window by whatever gimmick, in whatever excuse, we must know that Nigeria is truly sitting on a keg of gun-power. We may realize that Nigeria is on the brink as a result of this surge in emotional capital”.

What makes this scenario more sensitive, he further warned, “Is this disturbing piece of news some of us got earlier this year which should worry any true Nigerian.

“We were told that our debt servicing has exceeded our revenue generation. In business it is called bankruptcy. Whenever your debt obligations exceed your income, you are bankrupt. If what we heard is correct, then Nigeria is already automatically bankrupt.

“We now need somebody that understands the economy that will not only have the capacity to salvage the economy but someone who carries popular belief and mass following to lead the people to the economic war.’

He said since money became currency, the economy of nations is no longer determined by products (gross domestic product-GDP) but by international confidence level in that economy.

“That is why economies like Rwanda did aggressive rebranding and publicity when they rebuilt Rwanda to increase international confidence in the Rwanda economy. They focused heavily on a new perception of Rwanda that was just recovering from the war to show that this is no longer a war zone but an economic heaven for you to come and invest.

“Now, Rwanda is the fastest growing economy in Africa. It’s no brainer and it is not rocket science. Nigeria’s brand depends on the perception and confidence the international community and Diaspora Nigerians have in Nigeria, irrespective of whether Nigerians at home have confidence in Nigeria or not; which also is very vital.”

Better to move from politics to valuetics

The Mayor of Housing thus appealed to the populace to jettison political party bias and political correctness for now so the nation can pursue VALUETICS. “The greatest value we have now is the perception value that would boost both the economy and the polity with such level of confidence that would help everyone to move from bloom to boom.’

This, according to him, is when the most popular candidate at home and abroad is allowed to emerge and win this election by merit. “The social movement of a revolution that has started is becoming bigger because there is a thread woven around the word called Social Media where awareness level is high.

“We are close to cashing in and cashing out from Valuetics. If we make good use of the mass mobilization in the present dispensation where the highest number of Nigerians home and abroad have woken up to show interest in how they are governed and who governs them and what issues are on the table, Nigeria will experience a boost and a surge.”

He cautioned that time has come for citizens to know the place of emotional quotient (EQ).

“The new thing trending now in the corporate labour world is that EQ is now most regarded. This is because we the private sector operators have realized that economics cannot do without emotion and when you increase emotion, you increase economy.

“If you improve emotions, you positively improve economy, but in the public sector, it has not been appreciated as we appreciate it in the corporate world. I am happy that I am talking to corporate publishers who have the capacity to understand this concept.”

He went on: “You people can attest to the emergence and predominance of emotional intelligence now over just intelligent quotient. That is to show you the importance of what I am talking about.

The Mayor of Housing noted that at the end, it would be what Olusegun Obasanjo warned; “If the wrong candidate is announced in 2023, the amount of protests and anger that would erupt might swallow Nigeria.

“Even if there are no wild protests, economically, the perceived ‘wrong’ candidate will spend years and money to regain the perception and confidence of not just Nigerians but the international community. That might take us another four to 10 years. In that time, there would have been so much gloom and doom that our economy would dip further and things would worsen.

“Once things worsen, attrition and capital flight may be the next thing that would confront the nation because the little left would fly away. That would worsen the matter. This is what this important gathering is expected to help prevent. Enlightenment is very important at this point so those in a position to act would know the criticality of Nigerians getting it right this time.”

Other notable participants that spoke at the GOCOP conference including Dr Chichi Aniagolu-Okoye from Ford Foundation warned that 2023 may be Nigeria’s test to move forward or backward.

The chairman of the Independent National Electoral Commission (INEC), Dr Mahmood Yakubu, admitted that the outcome of the 2023 elections would affect the entire Africa because at 95m, Nigeria’s electorate is higher than all other West African countries voters put together at 73m.