2023: It’s the turn of southern Nigeria to produce next president, says Akeredolu 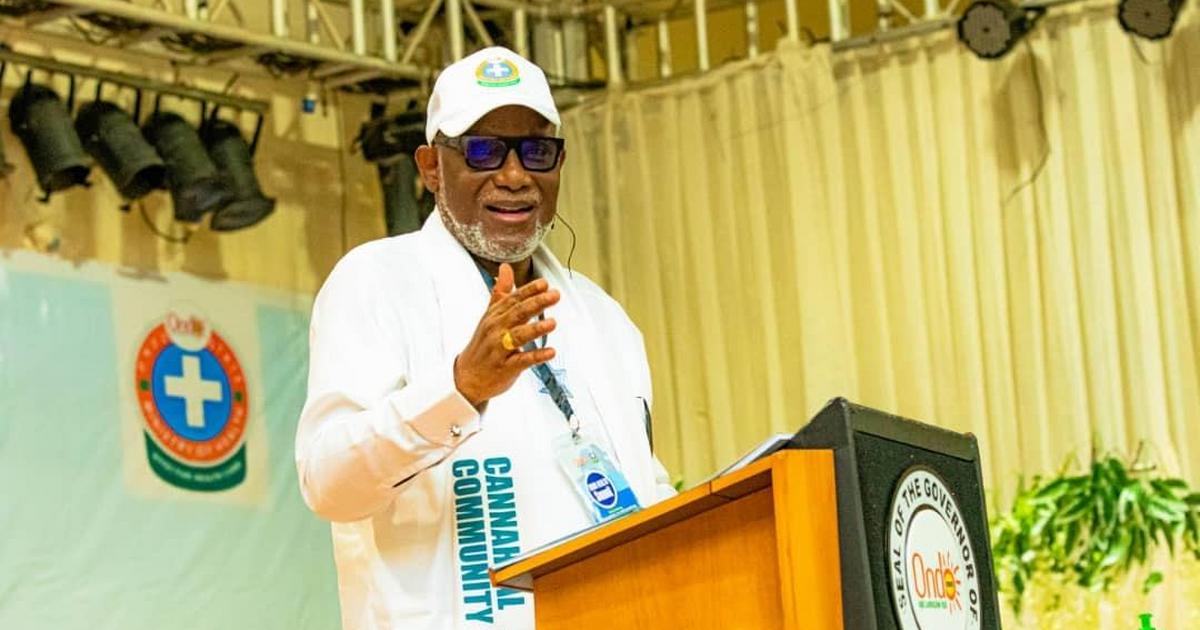 Gov. Oluwarotimi Akeredolu of Ondo State, has called on the leadership of the All Progressive Congress (APC) to zone the presidential position to the southern part of the country.

Akeredolu made call in a statement, tagged “Our Party, APC, Must Tread The Path Of Equity”, which was made available to newsmen on Tuesday in Akure.

The governor said that the party could not afford any internal bickering which could cause distrust and militate against cohesion, harmony and the zeal to achieve set objectives.

Akeredolu, who said that the current democratic dispensation is anchored on the unwritten convention driven by a principle of Equity, said the APC must do nothing which is capable of tilting the delicate balance against the established arrangement which guarantees peace and promotes trust.

According to him, “Our party just elected officers on the established principle of giving every part of the country an important stake in the political calculus.”

He explained that the focus has now shifted to the process which would culminate in the participation of the party in the general elections in 2023.

“All lovers of peace and freedom must do everything to eschew tendencies which may predispose them to taking decisions which promote distrust and lead to a crisis, the end of which nobody may be able to predict.

“The leadership of the party ensured that the principle of rotational representation guided its decision at the just-concluded convention,” he said.

Akeredolu, who said party chairmanship position had gone to the North and all other offices have been filled, said it is the time the leaders of the party must make a categorical statement, devoid of equivocation, on the pattern of succession.

He said the party executive committee had fixed a fee for the purchase of the nomination form for the office. It is expected, fervently, that it would proceed to complete the process by limiting the propensities for disagreement to a region for possible micro-management.

“It is very expedient that we avoid self-inflicted crises before the general elections. It is the turn of the Southern part of the country to produce the next President.

“The party leadership should have no difficulty in making pronouncement on this very important issue, just as it has fixed various fees for the purchase of forms.

“This must be done without delay. The principle of Federal Character is enshrined in the 1999 Constitution, as amended. It will be disingenuous for anyone to argue against rotation at this period.

“We must not keep our party men and women guessing on the position of the leadership of the party. This is the time to weigh in and take control of the process.

“No statement must suggest, even remotely, that the party harbours certain sentiments which may predispose it to consider throwing the contest open.

“This is certainly not the time for equivocation. Equity Dictates That We Take A Stand,” Akeredolu said.(NAN)

Lagos residents have called for stiffer measures to check the growing trend of underage persons being allowed access to hotels, alcohol and drugs.

A cross-section of residents in the metropolis who spoke with the News Agency of Nigeria (NAN) in separate interviews on Tuesday, said the responsibility to check the act rest majorly on parenting.

Mrs Opeyemi Adebayo, a teacher, said that the family had a major role to play on deciding how a child would turn-out or behave in the society.

“Parents need to spend more time with their children, yes Lagos stress is there but you should create time to monitor the activities of your children since you are capable of bringing them to the world.

“If you can’t do this everyday, create time. Parents should also be good examples because children mostly display outside, what they see or learn from home.” he said.

Mr Samuel Oseni, a clergy, however, told NAN that children should be taught in the way of the Lord so that the society would be a better place for all.

“The Sunday schools are there to teach these children what they may not teach them in school. Teach them to be better persons and lay good examples while at home with them,” he said.

Mr Chijioke Nwokonko, a lecturer in Ogun, said checking underaged access to hotels, alcohol and drug was one difficult thing to do in this part of the world, adding that government policies also make it difficult.

“I mean government policy like the citizens having their national ID card once they get to their secondary level of education.

“It should be strongly implemented by the government that before allowing one entry into a pub, club or a hotel, the ID card should be checked to be sure that such person has attained the required age limit to enable them visit such environment.

“Also, there are instances where these underaged children already have strong influences, they can call the manager to gain access and make the security man asking for ID card look useless,” he said.

Nwonkoko said that to correct or check this, law enforcement agencies that would act as the watchdog of such act should be created and adhere strictly to instructions by the government.

“Such agencies should visit hotels and clubs at random in disguise and once they see anyone perceived as underage, their ID cards should be requested and if found wanting, both the management and the underaged children should face the law.

“Drug abuse is drug abuse. This has nothing to do with age though, as such, anyone that is caught engaging in such act should be apprehended and should be made to go through the complete process of rehabilitation,” he said.

Mr Oluomo Talabi, the President, Lagos Hoteliers Association, said there had been measures to check underage persons from gaining access to hotels as the association strongly condemns the act.

“The measures have been on from time, it’s just that this issue of immorality on the part of our children is just coming up now, no thanks to social media but not withstanding, it is not something we condone as individuals and as an organisation.

“We have put measures in place and at every of our gathering, we do lecture ourselves on how to combat such a thing.

“You know that it’s not possible for a proprietor of the hotel to always be on ground at all times, even some of our staffs can be funny but we ensure that all our members have CCTV cameras to monitor what goes on within their premises.

“We organise seminars, lecture ourselves on the conduct of our staffs and the dos and don’ts that should be applicable in all of our branches even though not all hotels are members of our association,” Talabi said.

Talabi added that experts like university lecturers were sometimes invited to speak with hoteliers on the current trend in the hospitality industry to make their business run smoothly.

“Even on the issue of drugs, you are aware that particularly NDLEA invaded some hotels. This is not a palatable thing for us, in order for us not to fall victim of such, we talk to ourselves and of course we speak with security agencies by way of collaborating.

“We ask them what they want us to put in place, the dos and don’ts, we take it back to our members so we try as much as possible to adhere to the rules and regulations,” he said.

The president said that every member of staff working in hotels had been issued warning not to allow underage persons access and to the bars within the premises.

“We run bars in our hotels too, no underage can come in to our bars. They don’t even have access to the hotel in the first instance not to talk of access to the bar.” he said. (NAN)