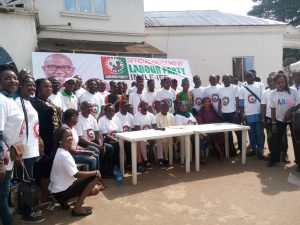 The Labour Party(LP) says it is positioned to take over the country at all levels in the 2023 general elections and provide good governance.

The Chairman of the party in Osun, Mr Olamide Awosunle, stated this on Sunday, while unveiling the party structure in Ile-Ife zone.

The News Agency of Nigeria (NAN) reports that the event was held at Afewonro Park, Enuwa, Ile-Ife.

Awosunle said the party was committed to the growth and development of the country.

He said the good plans of the party’s Presidential Candidate, Mr Petet Obi, could only materialised if elected in 2023.

Awosunle decried the security and economic challenges facing the country, saying that Labour Party would reverse the ugly trend if given the opportunity.

“It is highly pathetic that Nigerians in their own country, now in a hostage situation and there appears to be no meaningful and reasonable means of escape.

“In a country blessed with everything needed to be great, citizens are groaning under the yoke of insecurity and economic hardships.

“Nigeria and the world should know that Labour Party is the vehicle and Peter Obi is the driver to the actualisation of a new Nigeria,” he said.

Awosunle said with Peter Obi and Yusuf Baba-Ahmed, Nigeria is on the path to greatness.

The unveiling ceremony was attended by Mrs Busayo Obisakin, National Women Leader for Peter Obi and Co-ordinator for South-West, as well as other chieftains of the party in the state. (NAN)