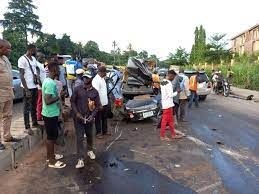 The Federal Road Safety Corps (FRSC) has confirmed the death of three persons in an accident involving a Toyota Matrix and a Howo Sino truck at Oniworo axis on the Lagos-Ibadan expressway on Sunday.

Mr Ahmed Umar, the FRSC Sector Commander in Ogun, who confirmed the incident to newsmen in Abeokuta, said the crash occured at 5:50pm.

The sector commander explained that the auto crash was caused by over speed and tyre burst which led to loss of control on the part of the Toyota Matrix.

He added that the Toyota Matrix with registration number WWD 621 AE rammed into the stationary truck marked GGE 614 XN.

The FRSC boss explained that nine people were involved in the accident who are all males, adding that four of them were injured while three died.

He said that the injured victims were taken to Victory Hospital, Ogere for treatment while the deceased were deposited at FOS morgue, Isara.

The sector commander sympathized with families of the victims, advising motorists to always carry out routine checks to ascertain the conditions of their vehicles. (NAN)