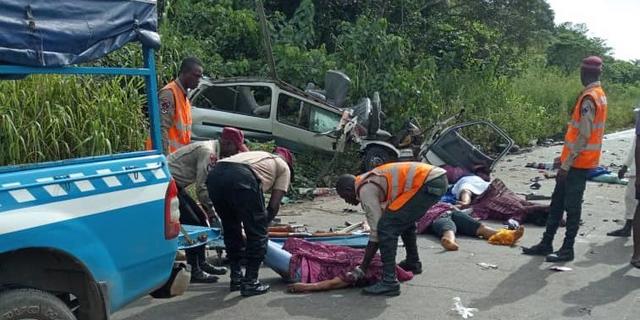 The Federal Road Safety Corps (FRSC) in Ogun on Wednesday said that three persons died in a lone accident on the Lagos-Ibadan Expressway.

The Sector Commander, Mr Ahmed Umar, who confirmed the incident to the News Agency of Nigeria (NAN) in Ota, said 17 other persons sustained various degrees of injuries in the crash.

The sector commander said the crash occured at about 1.30p.m. around Sandrete on Lagos-Ibadan expressway.

He said that a total of 17 people comprising five male adults and 12 female adults were injured, while three persons – a male and two female adults – died in the accident.

“The bodies of the victims have been deposited at the morgue of FOS Hospital, Ipara,Ogun, while the survivors are receiving treatment at Victory Hospital, Ogere,” he said.

Umar who attributed the cause of the accident to tyre burst and excessive speeding, cautioned motorists against speed violation and advised them to always check their tyres to know the expiration dates.

He however commiserated with the familes of the crash victims and enjoined them to contact FRSC office in Ogunmakin for more information about the crash. (NAN)