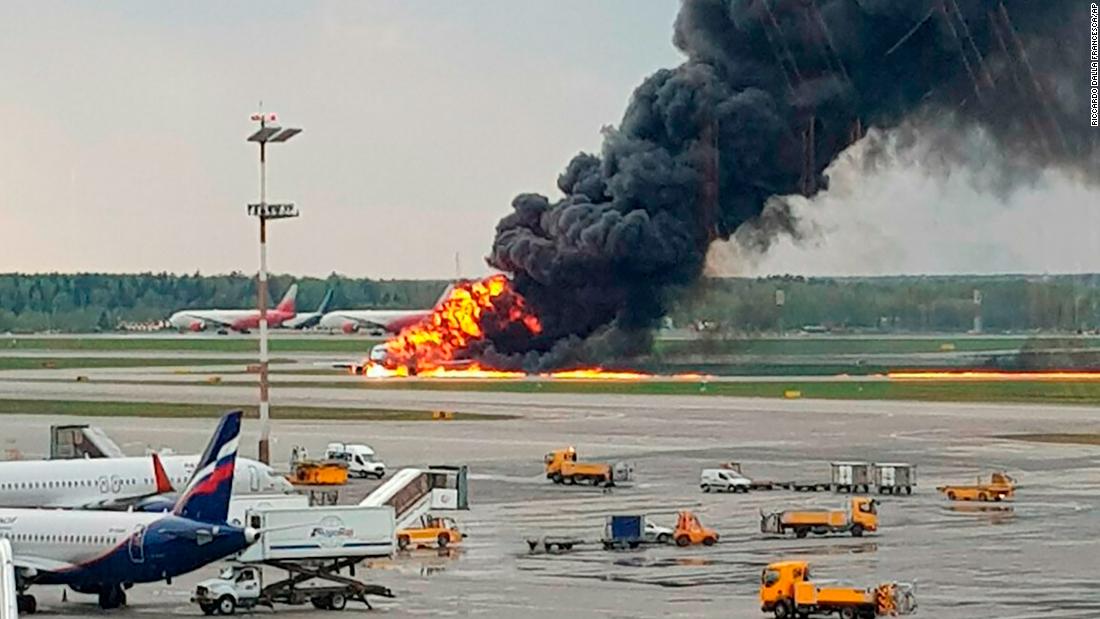 Russian passenger airliner was forced to make an emergency landing while on fire at Moscow’s Sheremetyevo airport Sunday, turning into a fiery ball as it skidded on the runway, killing 41 people.

Thirty-seven passengers have been confirmed alive. Five people have been hospitalized, according to Aeroflot airlines.
Russia’s Investigative Committee, the equivalent of the FBI, has confirmed death toll and said two children were among those killed.
There were 73 passengers and 5 crew members on board the Sukhoi Superjet 100 plane, operated by the Russian airline Aeroflot. It took off from Moscow bound for the northern city of Murmansk, but was forced to turn back due to unspecified “technical reasons,” according to a statement from the airline, which added that the engine caught fire.
Video of the landing was shot by Norenko Mikhail, a passenger on a different plane, showed massive flames and black smoke shooting from the aircraft as it descended onto the runway, and then burst into flames as it came to a stop.
Passengers evacuated using emergency slides, the video shows.
Firefighters have extinguished the blaze, according to Russia’s emergencies ministry.
Emergency services set up an operation center at the airport, and a reception point for relatives of the victims.
The airport has continued to operate, though at least half a dozen flights have been diverted to other airports or cancelled.
Russian Prime Minister Dmitry Medvedev immediately ordered that a state commission be established to investigate the caused of the fire, and the Investigative Committee said it has opened a criminal probe to establish the cause of the crash.

Russian President Vladimir Putin expressed condolences to the victims, and ordered a full investigation into the fire, his spokesman Dmitry Peskov told the Interfax news agency. Putin has also directed that all necessary help be provided to the victims. –
ABC News

SEC Photo News : Meeting on the Implementation of the Nigerian Code of Corporate Governance 2018 between FRC and SEC in Abuja.