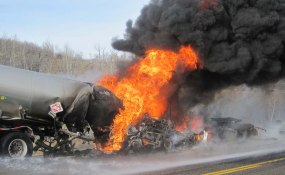 The blast on the RN1 route near the international airport Sunday night left the burnt truck’s wreckage, motorbikes and debris scattered over the road. Nearby houses were damaged by fire.

The explosion left 58 dead, the presidency said in a statement.