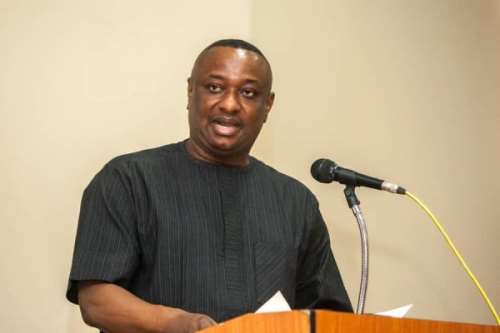 Minster of State for Labour and Employment Festus Keyamo says the Federal Government is yet to disburse N7.3 billion to the remaining beneficiaries of government’s 774, 000 Special Public Works Programme.

He made the revelation during the budget defence organised by Senate Committee on Labour and Employment for Ministries, Departments and Agencies (MDAs) held in Abuja on Monday.

Keyamo, who noted that the delay was due to bank issues, promised that the ministry would ensure that the funds were disbursed before the end of December.

The News Agency of Nigeria (NAN) reports that the programme was introduced in October 2019, following President Muhammadu Buhari’s approval.

The programme is domiciled in the National Directorate of Employment (NDE).

The programme seeks to address the problem of unemployment across the country, especially in the rural areas, thus making the unemployed youths more useful to themselves and society.

In the programme, beneficiaries are to be paid N20,000 a month for three months.

Keyamo, while making clarifications on the commercial banks used in disbursing the fund said “why we insisted on certain banks was because of auditing process.

“This is so that we have a clear audit instead of us chasing banks all over the place.

“We said the bank should use their local branches to ensure that those 1,000 people selected in that local government area go to those banks within that locality.”

The minister, however, said that the ministry had opened up the process whereby beneficiaries could use any bank in their locality.

“We have made an adjustment in the last few months. We are not attaching a particular bank to a local government again.

“So, no matter what it is, we will achieve 98 per cent success on the programme.”

Similarly, Director-General NDE Abubakar Fikpo said that the agency “does not have access to the funds for the beneficiaries”.

He said that the mode of payment to the participants was such that all monies were domiciled with the Central Bank of Nigeria (CBN).

“Each time we are proposing to pay, once we prepare the details for payment, what we do is that we send it to the accountant general not even CBN.

“It is the accountant general now that communicates with CBN that upholds these things and then pay. That is the process.

“What we normally send to the accountant general are names of participants, their account numbers, BVN, bank details and the amount.

“It is the accountant general that instructs CBN and then they effect the payment which was why sometimes we experience failed payment.”

After all explanation by the minister and the director general, Chairman of the Committee, Sen. Godiya Akwashiki said the duo would be invited by the committee for update on the programme.

Vice Chairman of the Committee, Sen. Kabiru Barkiya lamented over the inability of his constituents to access the facility.

“In my state, Katsina, some of the beneficiaries were asked to go and open an account in a bank where there are no branches in the state.”

Barkiya called on the directorate to ensure that the remaining funds yet to be disbursed got to the remaining beneficiaries.(NAN)

IPOB To Military: You Killed Political Thugs Not Our Members