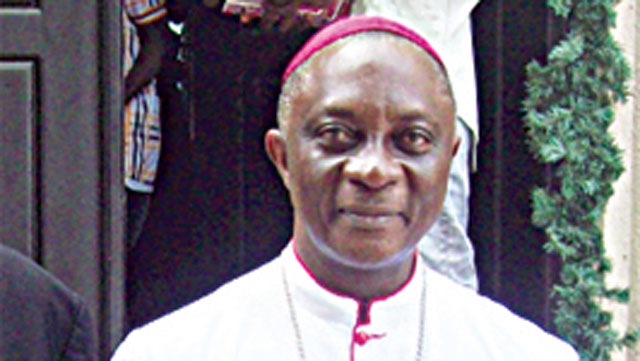 The Catholic Archdiocese of Lagos has unveiled a lineup of activities to celebrate the 60th birthday of Most. Rev. (Dr.) Alfred Adewale Martins, the Archbishop of the Metropolitan See of Lagos.
Four days of celebration have been earmarked to commemorate the event, beginning Monday, May 27, and running through Saturday, June 1, the D-day of His Grace’s birthday. According to Mr. Peter Nwanze, Chairman, All Purpose Committee, Catholic Archdiocese of Lagos, organizer of the event, the activities include Children’s Day with the Archbishop on May 27; Visitations of the Archbishop to Mother Theresa’s Home in Ketu on May 28 and other charity establishments; Celebration with the elderly residents at Regina Mundi Home and Choral Competition by the Music Commission on May 29 as well as the grand finale on June 1. Speaking further, Nwanze stated that the grand finale will commence with the Holy Mass at Holy Cross Cathedral, Lagos at 10a.m.
Two books titled ‘Grace to Live’ and ‘Voice of the Shepherd’ will be presented during the reception.
These events have been packaged to further highlight Most. Rev. (Dr.) Martins’ Episcopal motto ‘Called to Serve in Love.’ The Archbishop has over the years continued to demonstrate his passion for service through compassion and love. He has considerably dedicated his episcopacy to shaping the future of the child, enhancing hope in people, assisting the poor and caring for the sick in addition to his regular duties of improving the spirituality of the lay-faithful.
Born on June 1, 1959, in Abeokuta, Ogun State, he was ordained a priest on September 18, 1983 at the Holy Cross Cathedral, Lagos by the then Catholic Archbishop of Lagos, Anthony Olubunmi Okogie. He was appointed by the Late Pope John-Paul II, as the first Bishop of the Catholic Diocese of Abeokuta on October 24, 1997. Archbishop Martins was appointed and elevated by Pope Benedict XVI on May 25, 2012 as the Archbishop of the Metropolitan See of Lagos, to succeed His Eminence, Anthony Cardinal Okogie, having attained the mandatory age of retirement of 75 years. He was consecrated as the Archbishop of the Metropolitan See of Lagos on August 2, 2012.