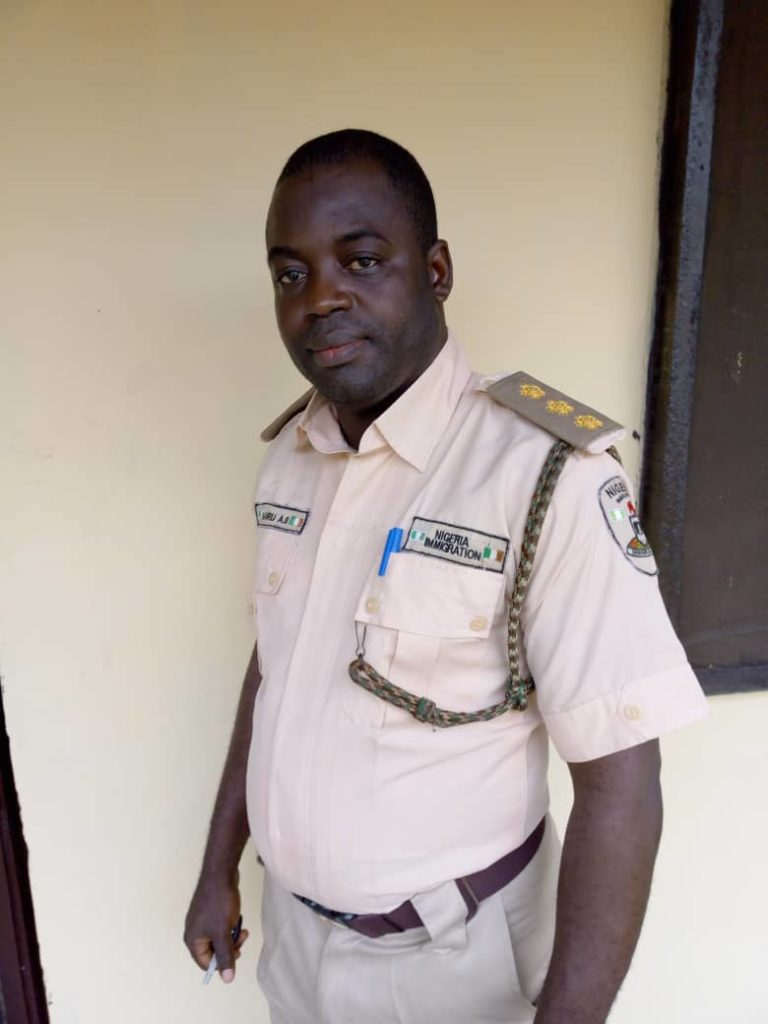 A Deputy Superintendent of Immigration, Mr. Yemi Badru attached to Ikoyi Passport Office, Lagos has sought the immediate intervention of the Nigeria Immigration Service and the Ministry of Interior over assault on him by a colleague.

In a petition to the Nigeria Police, which was made available to the media complaining about assault on his person by a Superintendent of Immigration, Mr. U.N. Umar also attached to the Passport command, Badru narrated how Umar slapped him severally in the course of his duty.

According to him, the beating, which was unprovoked resulted to bleeding from both his nose and ear sequel to which he was treated in at the military hospital, Obalende.

In his petition, Badru alleged that on July 30, 2019 he was assigned by an Assistant Comptroller of Immigration (ACI) to issue passports to applicants whose passports were already produced and ready for issuance.

He explained that he was carrying out the ACI’s directive when Umar who was not officially assigned to do the issuance walked in from his unit and started barking orders on him with the contention that he, Badru was slow in attending to the passport applicants.

With this attitude, Badru was quick to suspect that Umar was acting selfishly as he may have offered to help somebody without following due process.

The emerging scenario unavoidably resulted to the physical assault in the open space where passport applicants were seated.

According to Badru, the quick intervention of some senior officers saved the situation from degenerating.  However, Badru had to promptly put up a report of the incident to the Passport Control Officer who in turn set up a panel to investigate the matter.

The Deputy Superintendent in seeking for justice strongly believes that Umar was acting in line with the characteristics of some officers of northern extraction in the Service who believe that they could do anything and get away with it.

This feeling was shared by an officer who told journalists that he witnessed the incident.  Speaking anonymously, the witness said Badru was being intimidated because he “is not from the North”

Sequel to the public knowledge about the petition, a group of journalists sought audience with the Assistant Comptroller General in charge of Zone A, Lagos, Mr. Mohammed Alhaji Alfa. Speaking on the matter, the ACG said that he was already in touch with the management of the Ikoyi Passport Office and that discreet steps were already being taken on the matter.

According to him, Umar who reportedly assaulted his colleague had already confessed to a panel of inquiry set to investigate the matter that he actually slapped Badru out of anger.

The Superintendent was said to have pleaded for forgiveness and under taken in writing to offset whatever cost Badru may have incurred while treating himself.

To this, Badru was also reported to have accepted in writing to the panel.

Besides this, Umar the offending officer has been redeployed from the passport office to Zone ‘A’ headquarters to prevent a reoccurrence.

The ACG hinted that the measures taken so far are subject to further punitive measures by higher authorities of the Immigration Service.

When the journalists traced Badru to his Ikoyi Passport office, he admitted having accepted the apology of Umar but quickly emphasized that he did so under duress and would not want the matter to die at that level until Umar is punished according to immigration service rules.  He vowed to continue seeking redress until he gets justice.

Some retired Immigration chieftains whose opinion were sought on the matter, offered to speak on the matter but strictly on the basis of anonymity.

One of them, a former Assistant Comptroller-General said it was wrong for an officer of the Service to slap his colleague for whatever reason. He explained however, that the Service has mechanism for dealing with such issues.

A former Deputy Comptroller General of Immigration Service also shared the same view but added that so far as the Superintendent has humbled himself to beg his junior for forgiveness even admitting to offset his medical expenses was enough punishment and humiliation.

The former DCG also pointed out the fact that for the Deputy Superintendent to have resorted to petitioning the police and the media portrayed him as lacking in Service discipline since an in-house panel has already deliberated on the matter.