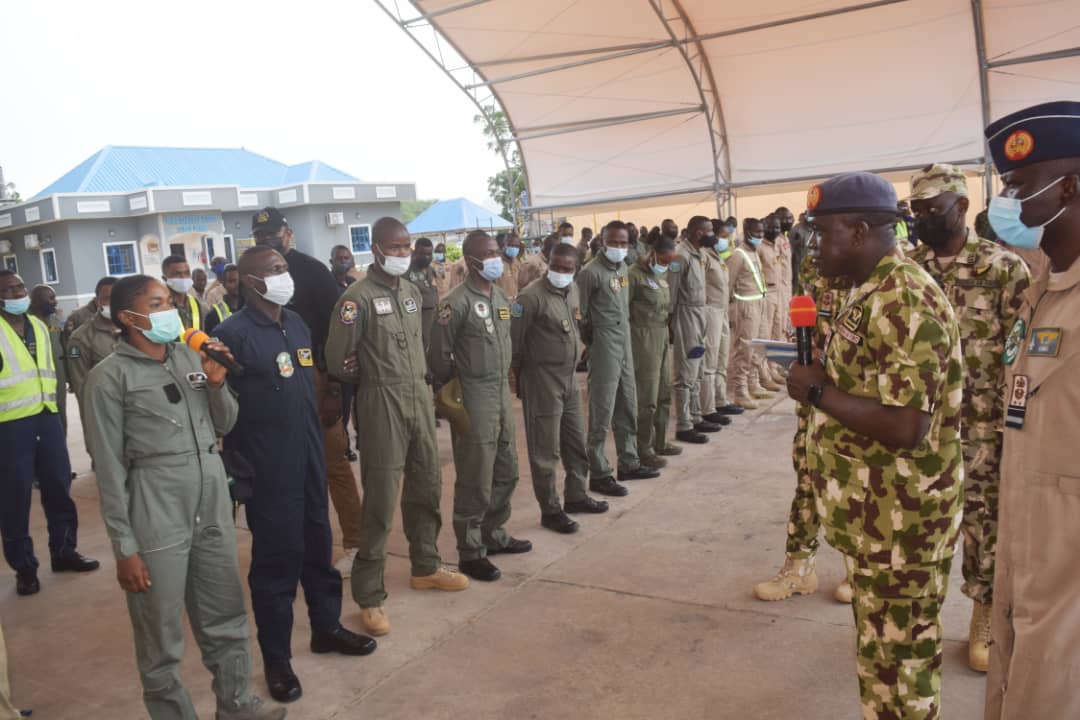 The Chief of the Air Staff (CAS), Air Marshal Oladayo Amao has charged personnel of the Air Component of Operation HADIN KAI (OPHK) to sustain the current onslaught against terrorists and insurgents in the North East.

This was contained in a press statement by Air Commodore Edward Gabkwet, Director of Public Relations and Information.

He gave the charge while on an operational visit to frontline troops of 105 Composite Group, Maiduguri and 103 Strike Group, Yola. The visits which served as morale booster to personnel of the Air Component afforded the CAS the opportunity to interact with them with a view to addressing some of their immediate operational challenges.

On arrival in Maiduguri, Air Marshal Amao was briefed  by the Air Component Commander, OPHK, Air Commodore Nnamdi Ananaba, who gave a summary of the major achievements recorded by the Air Component towards degrading the capabilities of insurgents in Borno State,  especially in the last 30 days.

Gabkwet further stated that the CAS thereafter commended the troops for their commitment to the current onslaught against insurgents in the North east, while urging them to sustain and maintain the momentum.

According to him, ‘The outcome of our air operations have been very encouraging and positive and we must sustain these efforts to remain on course towards meeting our overall end state of ridding the Region of these criminals.’

He went on to charge the troops to remain focused and committed towards their operational objective.

‘Absolute commitment, discipline and dedication is required at this point in time for us to get the job done’, he said.

The CAS also expressed optimism that the security threats confronting the country would soon be a thing of the past as the NAF, in synergy with other sister Services is working assiduously to flush out all criminal elements so as to enable all Nigerians go about their daily lives and businesses without fear.

He went on to state that in view of the centrality of air power in joint operations, the NAF would continue to provide the much-needed air support for the surface forces in all theatres of operation in the country.

While at Yola, Air Marshal Amao expressed appreciation to the personnel for their commitment and dedication to duty and charged them to continue to synergize their efforts with other security agencies within their location.

He also assured them that the entire Nation remains grateful for their sacrifice and commitment towards keeping Nigeria safe.

During the interactive session, several issues pertaining to welfare, promotion and discipline, among others were addressed by the CAS on the spot.

The CAS was accompanied on the visit by some Branch Chiefs from Headquarters NAF and Air Officers Commanding Tactical Air Command and Air Training  Command.