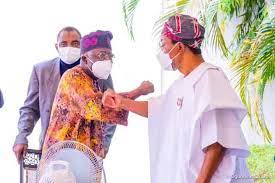 The subsisting strong ties between the people of Modakeke and those in Ode-omu has been further strengthened with the courtesy visit of a royal delegation of the Alayegun of Ode-omu, Oba James Bolarinwa Oladipupo to the Ogunsua of Modakeke, Oba Joseph Olubiyi Toriola, Ajibise Ogo 1, recently.

The Alayegun who led the executive officers of the Ode-omu Progressives Union (OPU) including the president of the union, Mr Akin Olaniyi, stated that he was happy to reunite with his source since the foundation of his town by six illustrious sons of Modakeke in 1909.

Oba Oladipupo disclosed that he was happy to identify with Modakeke as his root and that he was encouraged with the level of verifiable development which was epitomized by the new look of the palace that has become a landmark in the community.

The Alayegun acknowledged the cordial and peaceful relationship between the Ooni of Ife, His Imperial Majesty, Oba Adeyeye Enitan Ogunwusi, Ojaja II, and the Ogunsua and people of Modakeke.

He reiterated that he is confident that both Ile-Ife and Modakeke would witness developmental projects and peaceful co-existence because both the Ooni and the Ogunsua are men of peace.

The royal father who disclosed that he had met the Ogunsua outside the community shortly after his installation said he considered it proper and befitting to pay the royal visit to the Ogunsua in his palace.

The Alayegun used the occasion to invite the Ogunsua and his chiefs to the next Ode-omu Day coming up before the end of the year with an expectation to appear in the same uniform for the occasion.

The host, Oba Olu Toriola, expressed his gratitude with an assurance that there would be an improved cooperation between Ode-omu and Modakeke in the overall interest of the peoples of the two communities who are brothers and sisters.

The Ogunsua enjoined the Alayegun to prioritize programmes that could be beneficial to the youths as they are the bedrock of the socio-economic and political sustainability and emancipation of any community.

Oba Toriola reiterated that he has resolved to give his all for the improvement and development of his people and his community.

According to the Ogunsua: ” After God Almighty, I thank the current Governor Gboyega Oyetola-led administration, the Ooni of Ife, Oba Adeyeye Enitan Ogunwusi, Ojaja II and the co-operation of the peoples of Ile-Ife and Modakeke for the peaceful atmosphere in the two communities”.