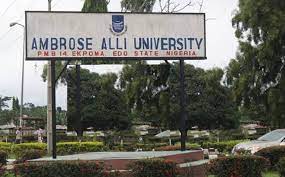 The recommendation was made by the Chairman of the Warri branch of the AAU Alumni association, Pastor Joseph Obaro Ikupa, he disclosed this to our correspondent recently in an exclusive interview at Ozoro, Isoko North Local Government Area, of Delta State.

Pastor Ikupa who is a Principal lecturer at the Delta State Polytechnic. Ozoro, now Delta State University of Science and Technology disclosed that the Ambrose Alli University (AAU) at 40 years has reached a milestone in its achievements and is therefore worthy of celebration.

“As part of activities to mark the celebration, some distinguished alumni of the institution will be inducted into its hall of fame, and as Chairman of the Warri chapter he has recommended the Delta State Deputy Governor, who himself is a member Board of Trustees of the Alumni Association, the Speaker Delta State House of Assembly (DTHA), who has done so much to promote the image of the university and to assist the alumni association, especially the Warri chapter to which he belongs in all her activities for induction”, he said.

Ikupa said their recommendation is due to their diligence and support for the Alumni association and by extension the University generally.

He disclosed that the institution would be celebrating its 40 years anniversary in June this year.

Other distinguished alumni to be inducted in dude Ama Etuwswe SAN and John Aikpokpo Martis Esq, who is the first Vice President of Nigeria Bar Association (NBA).

He disclosed that these recommendations were made to the AAU at 40 planning committee recently when the group called on the Chairman, ward chapter to send names to be included in the institution’s hall of fame to the inaugurated soon.