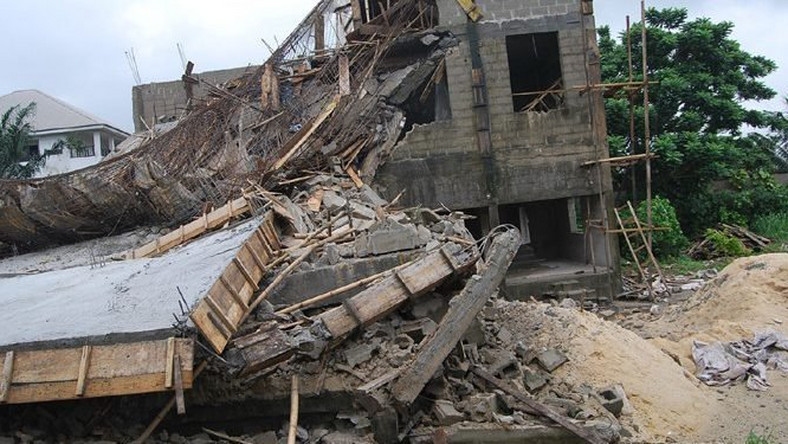 The Anambra Government on Sunday promised to offset medical bills of three casualties of building collapse still receiving treatment at the General Hospital, Onitsha.
According to a statement issued by C-Don Adinuba, the state Commissioner for Information and Public Enlightenment, the government has also set up a panel to investigate the incident.
He said the government condoled with the families of two persons, including the site engineer, who lost their lives to a four-storey building collapse at No. 9 Ezenwa Street, Onitsha, on Wednesday.
The commissioner noted that the state government would pay the medical bills of three other casualties still receiving treatment at the General Hospital, Onitsha.
The News Agency of Nigeria reports that the police had, while confirming the incident, said three casualties, whose identities are yet to be ascertained, were taken to hospital by the Red Cross.
According to the commissioner, the state government condoles with families and friends of the victims.
He said: “Following the incident, the State Government has set up a panel to probe the incident.
“The panel is to find out both the immediate and remote causes of the building failure, including the calibre of persons and quality of materials used as well as granting of approval by the appropriate regulatory body.”
He further explained that determining the cause of the incident would go a long way to prevent similar occurrences in the state in future.
According to him, this is part of the overall strategy to make Anambra remain the safest and most peaceful state in Nigeria.
He said: “Governor Willie Obiano has stated that members of the panel will be drawn from, among other bodies, the Nigerian Institute of Building, the Nigerian Society of Engineers, Anambra Raw Materials Testing Laboratory and the State Emergency Management Agency as well as the Nigeria Police Force.
“The government appreciates the efforts of individuals and organisations that worked tirelessly to save the lives of victims and to ensure that the incident did not result in chaos.”