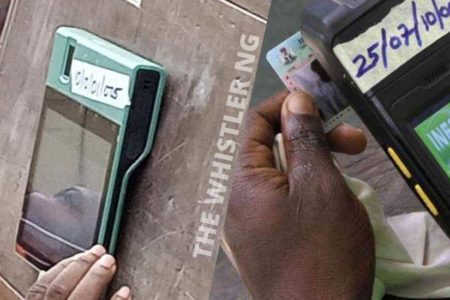 A new device that promises 97% success rate, as against 37% with the Smart Card Reader, will be deployed for voter accreditation by the Independent National Electoral Commission (INEC) in the November 6 Anambra governorship election.

INEC will replace the Smart Card Reader with the Bimodal Voter Accreditation System (BVAS) for authentication of voters at the polls.

Festus Okoye, INEC’s National Commissioner and Chairman, Information and Voter Education Committee, explained how the new device would be deployed when he featured on Arise TV’s ‘The Morning Show’ on Thursday.

Before the introduction of the BVAS, INEC had allowed the use of incident forms for capturing voters whose fingerprints were not authenticated by the Smart Card Reader.

But due to reports of voting fraud arising from failure or deliberate non-use of the Smart Card Readers at polling units, the electoral body has introduced the BVAS for electronic authentication of voters’ finger prints or facials.

He explained that, “What we have done is to have technological convergence. We have introduced the INEC Voter Enrolment Device. That enrolment device is what we are using for the purposes of the continuous voter registration exercise. And we are using this particular device to capture the finger prints of registrants and also to capture their facials.

“Now, in the Anambra governorship election, this INEC Voter Enrolment Device will now become what we call the Bimodal Voter Accreditation System (BVAS). We have going to use it for the purposes of accreditation. When the voter gets to the polling unit, we will first of all see whether the Bimodal Voter Accreditation System will recognize the finger prints. If it is unable to read the finger print, it will now capture the facials.

“After the election, this Bimodal Voter Accreditation System device will now transform into a Z-pad and we are going to use it for the purposes of uploading polling unit results into our INEC result viewing portal. So, it is a three in one thing that we have packaged. We are advancing and not regressing. So, what we have done is to gradually retire the Smartcard Reader and also retire the Z-pad and have a convergence that does multiple things for us.

On how effective the BVAS is, Okoye said: “When we compared what happened when we were using the Smart Card reader and what happened when we deployed the BVAS, you can see that previously we’re recording around 37% accreditation, but using the BVAS, we recorded over 97% success, so we are excited at the fact that we have a much more robust ruggedized application that we are going to deploy.”

Recall that the INEC Chairman, Mahmood Yakubu, had during the commission’s third regular quarterly meetings for 2021 declared that a “no electronic authentication, no voting” strategy would be deployed henceforward.

“We believe that this multi-layer process will eliminate the possibility of voting by identity theft using another person’s PVC. Where the voter fails both the fingerprint and facial authentication, he/she will not be allowed to vote. In other words, no electronic authentication, no voting.

“We are convinced that the new machine is robust enough to further guarantee the credibility of voter authentication and transparent management of results during elections,” Yakubu had said.- Whistlers