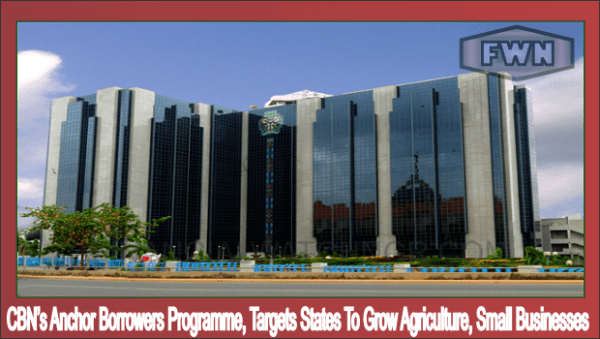 The Anchor Borrowers’ Programme initiated by Central Bank of Nigeria (CBN) is targeting one million tones of rice from the cluster of farms in Niger State.

CBN Governor, Godwin Emefiele, who disclosed this at the weekend during the inspection of rice farms in Doko, Lavun Local Government Area of Niger State, said over 14,000 farmers in the state have benefited from the programme.

He said that about N2 billion had already been disbursed from the Micro, Small and Medium Enterprise Development Fund (MSMEDF), adding that enhanced funding for agriculture, through the scheme, was in line with the bank’s resolve to achieve a strong and sustainable agriculture with integrated value chains.

A fortnight ago, Emefiele and the Minister of Agriculture and Rural Development, Chief Audu Ogbeh, inspected the more than 2000-hectare rice farm owned by Coscharis, which CBN had earlier supported with N2 billion.

Ogbeh commended the farmers for contributing to efforts aimed at ensuring food security for the country, assuring the farmers of mechanised system of production.

According to him, given the increased rice production across the country, government would soon stop the importation of rice into Nigeria.

He also promised a solar-powered irrigation system to ensure an all-year-round farming activity, urging the farmers to embrace shifting cultivation to ensure the restoration of depleted soil nutrients.

The Special Adviser to the CBN Governor on Development Finance, Paul Eluhaiwe, said the topography of the state was conducive for the cultivation of other grains or seeds such as millet, guinea-corn, sorghum and cotton, noting that Niger State would soon be competing with Kebbi State in view of the volume of metric tonnes of rice being expected from the harvest.

Earlier, the Chairman of the Farmers’ Cooperative in Niger State, Alhaji Ahmed Mohammed expressed appreciation to the Federal Government, agriculture ministry, the state government and the CBN, for assisting the teeming farmers in the state.

While citing lack of mechanisation and irrigation for dry season farming, as some of the challenges faced by the farmers, he said the farmers would remain focused  and committed to rice production, as the CBN programme was poised to address the issue of local agriculture production in the country