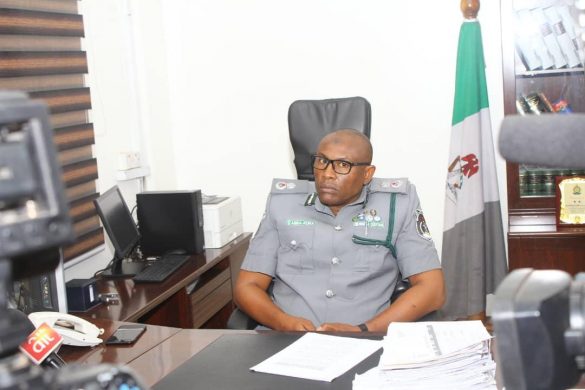 The Commands Public Relations Officer, DSC Nkiru Nwala said the Controller has changed his strategy to build on the existing standard in maximum revenue collection he met and promised to renew his plan for uptimum trade facilitation, ensure total compliance by Stakeholders, frustrate illegal activities as a driving force to greater productivity.

Kura who had assured of continuity, has few weeks ago promised to bring back the traditional Stakeholders monthly meeting where the Service, Freight Forwarders as well as the media rob minds to brainstorm on important issues of acceleration of efficiency in service delivery.

Nwala, disclosed that the new management of Comptroller Abbas Jurassic is devising a robust method to promote excellence through the Federal Government’s “Executive Directive” on the aspect of the Ease of Doing Good Business and by making the Command b more business friendly for investors to patronize.

Kura, has also keyed into the government policy on fast track of cargoe clearance at seaports ensure his commitment on the International level.

It is on record that, going by the nation economic imbalance and business degradation, in January 2019 the Command polled N32.5billion. In the same corresponding period under review of 2018, the total amount of N31billion was collected as revenue.