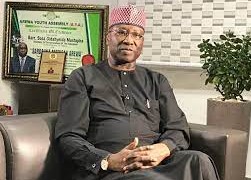 The Secretary to the Government of the Federation (SGF), Mr Boss Mustapha, has called on the 24-Man Advisory Committee on the Reform of the Armed Forces and Defence, for proactive processes to help address security challenges in the country.

Mustapha made the call on Thursday, when he received the 24-Man Advisory Committee Chaired by retired Maj.-Gen. Alwali Kazir in Abuja.

The SGF who described the reform process as a step in the right direction, assured of his commitment for the approval of the recommendations for the development of the country.

According to him, there was need to reform the military and security architecture to help address security challenges in the country.

“Reforms are critical and difficult to implement, but the step taken by the Ministry of Defence is a right step in the right direction to address security challenges.

“The reasons we are still battling with insecurity is because we have not reformed our military architecture and considering the territorial nature of our country, there is need for the security rejig.

“I am committed to anything that will transform the Armed Forces and in any capacity I will do my best for the necessary approval,” he said.

The Committee Chairman, General Kazir, assured the government of firm commitment to carry out the assigned task given to the Advisory Committee.

Kazir said this was with a view to emplacing envisioned robust, responsible and responsive Armed Forces capable of delivering results to address the security challenges of the country.

The News Agency of Nigeria (NAN) recalls that the Minister of Defence, retired Maj.-Gen. Bashir Magashi, on Sept. 28, inaugurated a 24-Man Advisory Committee to drive the recommendations on the Reform of armed forces reforms and Defence.

The committee was also to effect a 7-point terms reference among other things, examine the recommendations of the Reform Committee’s report and classify them into immediate, short, medium, and long term as appropriate. (NAN)