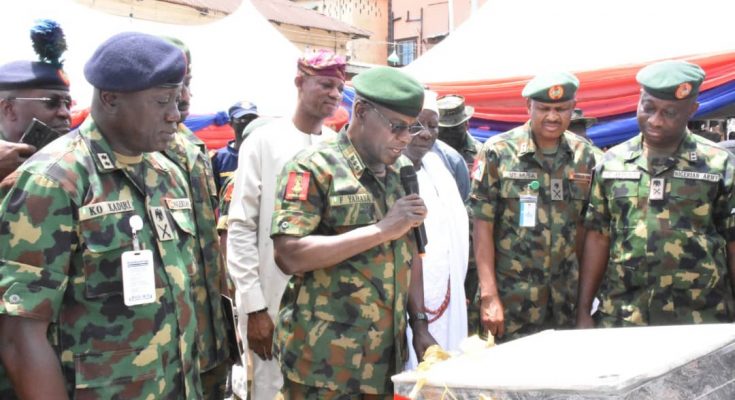 The gesture is in line with going effort to improve Civil-Military Cooperation between the public and the Nigerian Army (NA).

Commissioning the project, the Army Chief disclosed that the notion behind the COAS’ Special Intervention Civil Military Cooperation Project is to give back to communities, whose sons and daughters serve the nation and have through a dint of hardwork and diligence attained the pinnacle of their career as serving Generals of the NA.

He noted that the project was approved at the instance of Maj Gen Kamilu Olayinka Kadiri, the Commander Corps of Engineers, Nigerian Army, who hails from Lagos State.

While giving an insight into the project profile, Maj Gen Kadiri disclosed that the decision to sink boreholes with treatment plants and install Streets Lights in the community was premised on needs assessment and extensive consultation with stakeholders in the community.

The Army Engineers Corps Commander further stated that the project includes 4 water points, spread across the community, with each having two boreholes powered by four 250 watt solar panels and the other powered with electric generators as alternative power source.

He pointed out, that all the water points have reverse osmosis purification plants to treat the water.

Still in Lagos, the COAS also paid a courtesy visit to the Oba of Lagos, His Royal Majesty, Oba Rilwan Aremu Akiolu at his Palace in Lagos.

Speaking during the visit, Gen Yahaya informed the Royal father that he was on an operational tour of 81 Division Area of Responsibility to assess the security situation and ongoing operations.

He appreciated the Oba and the people of Lagos for their support to 81 Division of the Nigerian Army, stressing that the cordial civil-military relations in the state has enhanced the Division’s operational engagements in Lagos and adjoining states.

In his response, the monarch lauded the continuous cooperation and peaceful coexistence between residents of Lagos and the Army.

He noted that 81 Division in synergy with other security agencies have efficiently maintained peace and tranquility in Lagos and other adjoining states.

The Oba gave his royal blessings to the COAS and wished him a successful tenure in office.

The COAS was also accompanied by Maj Gens Olayinka Kadiri and Abiodun Owolabi, who are Corps Commanders Engineers and Signals respectively.

The commissioning was held on Thursday, 24 March 2022 at Abakpa Cantonment, Enugu.

The COAS, who was represented by the General Officer Commanding 82 Division, Nigerian Army, Major General Taoreed Lagbaja, stated that the project is part of wider constructions of RSMs Houses across all the Divisions of Nigerian Army.

He maintained that the commissioning of the residence is part of COAS welfare agenda aimed at restoring the prestige of RSMs office and boost the morale of troops in discharging their responsibilities.

Earlier, the Commander 44 Engineer Brigade, Brigadier General Olugbemi Obasanjo, disclosed that the project was completed in good time to enable the RSM have a befitting official residence.

He added the COAS has also approved the extension of such projects to all RSMs in Corps, Brigades down to Battalions among other formations.

Highlight of the ceremony was the handing over of keys to RSM of Headquarters 82 Divsion after the guided tour of the facility.