ASUU holds NEC meeting, may embark on another strike 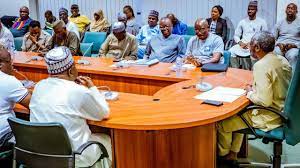 I am not sure that’s an option before the NEC, but nobody can tell until during the meeting

There is palpable fear of another round of strike across Nigerian public university campuses as the Academic Staff Union of Universities (ASUU) is billed to hold its National Executive Council (NEC) meeting in Calabar, Cross River State capital, between Saturday (today) and Sunday.

ASUU, the body of university lecturers in the country, has been at loggerheads with the Nigerian government over unfulfilled pledges and the continued refusal to pay the eight month salaries of its members withheld for the period of the last prolonged industrial action by the union.

NEC is the highest decision making body of the union and sources who are members of the body have confirmed the possibility of declaring another round of indefinite strike action by ASUU at the meeting or later in the month.

Meanwhile, university students, shop owners and other service providers on the campuses are agitated about the development, saying such action would dash many hopes.

A member of ASUU-NEC who pleaded to be anonymous for not being authorised to speak on the matter, said that the meeting was part of a quarterly meeting held by the union.

The official said: “I am not sure that’s an option before the NEC, but nobody can tell until during the meeting.”

In the past weeks, the lecturers declared a lecture free day and carried out peaceful protests on their respective campuses.

During the protests, they threatened to invoke a ‘No Pay, No Work’ policy, should the government fail to release their withheld March to September salaries and the remaining parts of their October salaries.

After ASUU suspended its strike on 14 October, the lecturers were paid a ‘mutilated’ salary for the month, and the remaining months’ salaries withheld.

The government said the payment was on a pro-rata basis as the union only suspended their strike two weeks into the month. But ASUU protested, accusing the government of casualising the work of the academics.

Despite protests and the intervention of the Speaker of the House of Representatives, Femi Gbajabiamila, the executive arm of government has insisted it would not shift grounds on implementing the ‘No Work, No Pay’ policy.