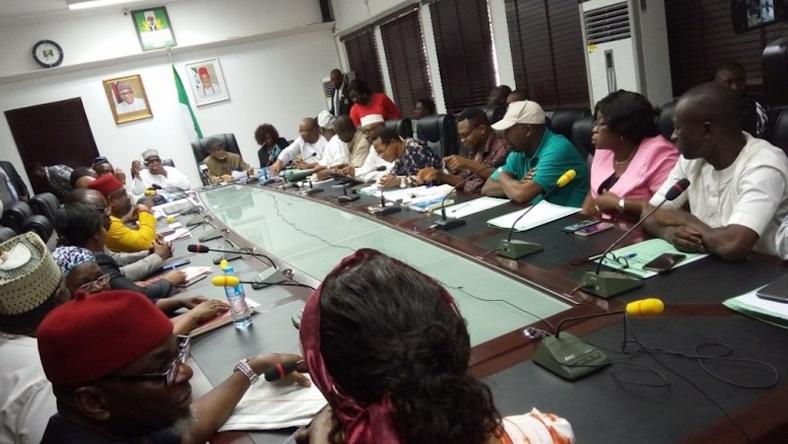 The Academic Staff Union of Universities (ASUU), has suspended its three-month strike.

The decision was taken Thursday night after it reached agreement it reached with the Federal Government.

As a result of the agreement which was signed between the union leaders and government officials, the leadership of ASUU announced the suspension of the strike action.

Minister of Labour and Employment, Senator Chris Ngige said at the end of the two hours meeting that all eight areas in contention have been resolved by both parties while implementation of some the agreement has already commenced.

The Minister listed areas in contention which has been resolved to include the Nigeria University Pension Company, constitution of visitation panels, shortfall in Salaries, Earned Academic Allowance and revitalization funds for universities, adding that while the union has already collected the certificate for NUPENCO, government has made money available for the payment of the shortfall in salaries as well as Earned Academic Allowances.

He also said the government has agreed to release N25 billion as revitalization fund between April and May 2019 after which it will commence full implementation of the 2009 agreement, while allowances of lecturers of University of Ilorin is to be paid immediately.

The parties, he said also agreed that the Babalakin Committee which is charged with renegotiating the agreement should reconvene latest 18th February and March 29, 2019.

Addressing media later, President of ASUU, Prof. Biodun Ogunyemi announced that the leadership of the union has agreed to suspend the strike action immediately beginning from Friday, February 8, 2019 with the condition that it will not hesitate to resume the action if the government failed to meet their part of the agreement.

He, however, lamented the role played by some Vice Chancellors who attempted to break the rank of the union, adding that it will not hesitate to tackle them head-on.

Ogunyemi said that “Based on the initial proposals from Government, the Union made extensive consultations through its various organs.

“The final level of consultation was the meeting of the National Executive Council (NBC) which took place 6th-7th February, 2019. NEC resolved that: Following a careful review of the report of engagements with the Federal Government on proposals for addressing all outstanding in the 2013 M011 and 2017 MoA, NEC resolved that the current strike action by the Union should be suspended conditionally with effect from 12.01 am on Friday 8, February, 2019”.

“However, should the government fail to fulfil its part of the agreement as reflected in the 2019 Memorandum of Action, ASUU shall resume its suspended strike action as the Union deems necessary”.

“ASUU notes, with serious concern, the covert and overt roles of some vice Chancellors in the management and application of funds attracted by our Union to Nigeria’s public universities. Consequently, we condemn, in the strongest terms, Vice-Chancellors who have made efforts to undermine and, in some cases, attempted to break our patriotic struggles for the revitalization of public universities in Nigeria.

“ASUU will not shy away from taking headlong those Vice-Chancellors who are reputed for acts of impunity, nepotism and other forms of conduct which are antithetic to university culture and the progressive development of our universities. Our union will compile all their shenanigans and forward them to relevant authorities for further action.”

At The Official Sutting Down of Dantata Success and Profitable Company, Kano, On Wednesday