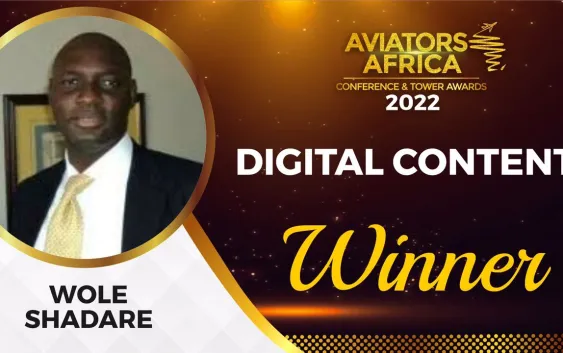 Founder and the Chief Executive Officer (CEO) of Aviators Africa Conference and Tower Awards, Toni Ukachukwu extolled the qualities and professionalism of Shadare whom he said is one of the most respected, highly professional aviation and travel writers not only in Africa but around the world.

Ukachukwu said he was not surprised that Shadare emerged top from a pool of equally good writers who have contributed immensely to the growth of aviation reportage in the continent and around the world.

His words: “The awards come in two categories. The first sets of categories are for individuals who are recognised as change-makers in the industry for their endeavours and their contribution to the progress and development of aviation in the continent. The other set is for brands in the aviation value chain and were awarded in different categories.”

“Then, the third which is a non-voting category is the category which recognises or inducts one male and one female into the Aviation Hall of Fame and that was taken by Capt. Irene Mutungi, the first African woman to fly the B787 otherwise known as the Dreamliner, and Ato Girma Wake, the Chairman of Ethiopian Airlines for the meritorious work they have done for aviation in the continent.”

Explaining how the winners emerged, Ukachukwu said: “Basically, the award category was put out for nomination or a call for nomination in each of the categories for change makers and brands which was over a month period. After that, nominations were then collated and voting was opened. “Wole Shadare was one of the nominees and we put them out for voting. He came out top.

“We also showcase at the event how nominations came about with the voting percentages. Shadare came top in his category that equally had strong contenders. All we needed to do was to collate the votes and announce the winners at the Gala Dinner awards in Johannesburg, South Africa.”

An elated Shadare dedicated the award to the crew of Aviation Metric and to the management and staff of New Telegraph Newspapers who have given him tremendous support to be a better journalist as he continues to improve in his chosen career.

Shadare, a serial award winner, was in August 2021 decorated as one of the 100 top aviation leaders in Nigeria.