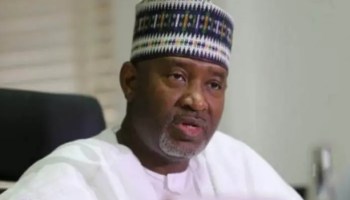 Aviation Minister, Hadi Sirika, has said he was yet to be served with court papers to stop the takeoff of Nigeria Air.

The Minister said this while in Lagos to commend the successful completion of the 18/L runway of the Lagos airport that was completed last week more than 16 years since the runway was left without Airfield Lighting (AFL).

“I am not aware that anyone is in court. I don’t have any court papers; otherwise, I am not interested. I cannot see any rational court that will say that I am stopping somebody from establishing a company because Nigeria Air is a limited liability company known to the Nigerian laws in the corporate affairs commission.

“If anybody wants to come and invest in that company, there is no law in Nigeria that stops him from doing so. If there are foreigners coming to invest, nobody stops them from investing. You can own a company 100 percent. What would you say to Shell, Unilever, and Julius Berger? There are companies in Nigeria registered by Nigerian law and people are coming to invest. This is what we want. We want Foreign Direct Investment (FDI). If people or Nigerians are investing in the airline with over $200 million in Nigeria and so what.  We want more of them”.

The Minister was reacting to reports that some airline and their promoters had approached the court to stop the take-off of the airline set to commence operations in December 2022.

Some airline operators and their sympathizers have faulted the ceding of 49 per cent equity shares to Ethiopian Airlines said to be the most successful airline in Africa while the Federal Government owns 5 percent with MRS and Skyway Aviation Handling Company Plc (SAHCO) are the other shareholders.

The carriers equally expressed the concern that the airline with Ethiopian Airlines as the biggest shareholder would stifle the domestic airline market with them being at the receiving end.

Sirika disclosed that when the airline was still in its embryonic stages, he reached out to Air Peace chairman, Mr. Allen Onyema, Azman Chairman, Abdulmunaf Yunusa Sarina, and others to invest in the new airline but was rebuffed by the airline owners, stressing some of them later accused him of not making the request verbal.

“I heard that the airline owners said that they were not carried along. If you were there at the National Assembly, I told them where I met them like the Max Air, Azman, Air Peace, Ibom, everybody where I met them and told them to please come and partner in this airline and own it, telling them that it is meant for the private sector. I told Air Peace to come and invest in this one and one of them said to me that I should make it formal.

“I said to him that I met you in your own place, met with you and invited you and told him that I have put it in all places as adverts. I also put it in the Economist, on television, and also put it on the website. How formal can that be? I always beg them to say all you stakeholders are invited to be owners of the airline as private sector people. Nobody will say he was not invited”.

Speaking on the planned demolition of many structures at the Lagos airport to give room to the rail project to link the international wing of the Lagos airport with the domestic terminal, Sirika said if he had his way, he would commence the demolition exercise tomorrow.

“Assuming that is even correct, I wish it would happen tomorrow morning. Is this eyesore what you want as an airport? Aerotropolis is part of the roadmap. Don’t you want a rail link between the old and the new terminal? Don’t you want better structures with cinemas, spars, shopping malls, banks, airline offices, and befitting headquarters of FAAN in Lagos?

“Is the chaos around here what you want as an airport? Should we continue to live like this but when you travel to Dubai or Ghana, you come back to say, this is wonderful! Same us will go to Ghana, take pictures to come and show us by saying see common Ghana and their infrastructure. Is that what you want? Given the chance, I will demolish all the ramshackle facilities in this airport to pave way for a better airport city. I told somebody that I am going to demolish from where Arik/ Nigeria Airways, the police, and the Aerocontractors were to Bristow and put something that is befitting of Lagos. This is our premier airport”.