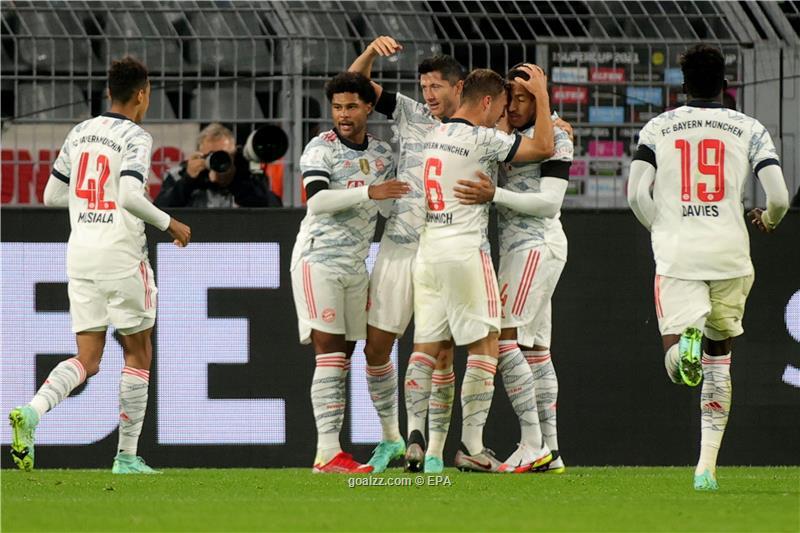 The victory acted as a timely reminder the champions would not give up their Bundesliga title without a fight.

Bayern Munich were held to a draw at Borussia Moenchengladbach in last weekend’s league opener as a bumpy start under new coach Julian Nagelsmann continued.

But an improved Bayern Munich, tightening at the back to largely keep Erling Haaland quiet while being a constant threat in attack, earned a deserved first win for their coach.

It was his first at the club for Nagelsmann and it also brought his maiden title as coach.

Lewandowski’s thumping 41st minute header broke the deadlock and Mueller, with a tap-in straight after the re-start doubled the lead.

Borussia Dortmund replied through a brilliant goal from Marco Reus midway through the second half but a hideous error from Manuel Akanji let Lewandowski complete his brace and seal matters.

Both sides and the 25,000 fans attending under coronavirus rules observed a minute’s silence for Bayern Munich legend Gerd Mueller, who died aged 75 on Sunday.

Bayern Munich made the quicker start to immediately expose full-back Felix Passlack, whose give-away led to Kingsley Coman shooting over.

Reus had a shot saved but in the first half Haaland was hardly a factor other than setting up Youssoufa Moukoko to score when well offside.

Borussia Dortmund had a massive let-off when Mueller and Lewandowski were blocked from Joshua Kimmich’s quick free-kick, but they fell behind shortly before the break.

Passlack bore the brunt as a hopeful ball to Haaland was returned down his flank with interest.

Serge Gnabry’s quick feet made space and his cross was met by the unstoppable Lewandowski.

And in the 49th minute it was full-back Alphonso Davies who took advantage down Passlack’s wing to cross and though Lewandowski miscued his flick, Mueller was left with an open goal.

Lewandowski did score his second second, in the 74th, when returning substitute Corentin Tolisso blocked Akanji’s pass into his path and he finished coolly.

With nothing to lose Dortmund had been pushing forward and 10 minutes earlier were rewarded through Reus’ shot curled into the top corner from outside the box.

It came after Haaland had a goal rightly disallowed for a marginal offside but with Dortmund’s momentum halted Bayern lifted the trophy for the sixth time in the last decade.

Whether it is a signal of what is to come in their bid for a record-extending 10th Bundesliga title remains to be seen.(dpa/NAN