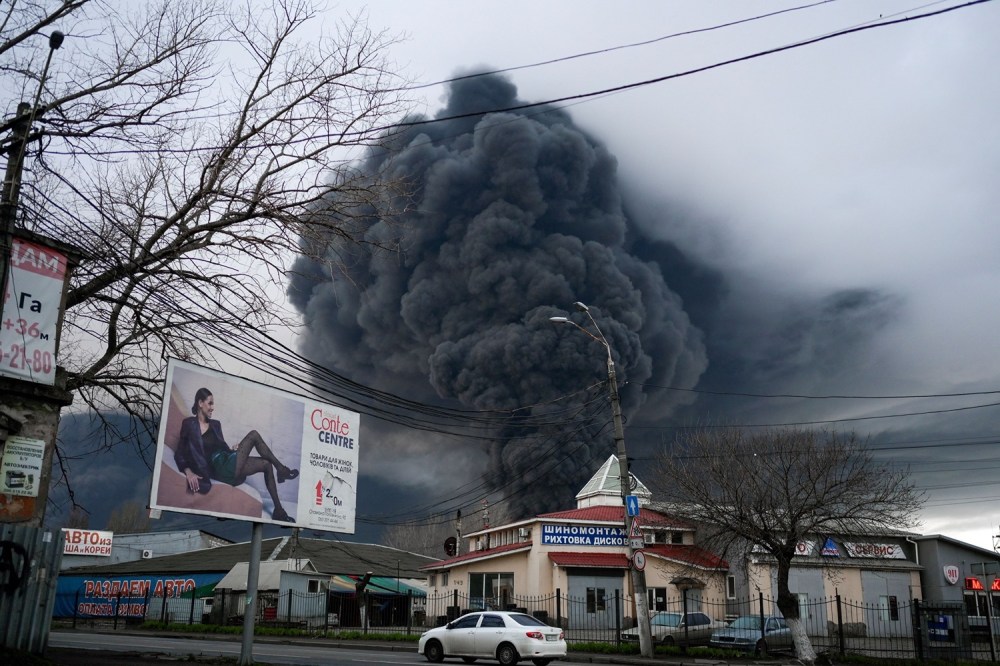 Ukraine is the fifth largest exporter of wheat in the world and earlier this month, the UN’s World Food Programme Executive Director David Beasley warned that millions of people around the world would die with Ukrainian ports being blocked.

The Black Sea is bordered by Ukraine in the north, Russia and Georgia in the east, Turkey in the south, and Bulgaria and Romania in the west.

While Ukraine has secured some notable maritime successes since Russia began its war against Ukraine in February 2022, the Kremlin continues to remain more powerful in the northern Black Sea and has blocked Ukrainian ports.

According to news agency Reuters, Russian deputy foreign minister Andrei Rudenko said in negotiations between Turkey, Ukraine and Russia on Wednesday that Moscow was ready to provide a corridor for ships carrying food but only in return for the lifting of some Western sanctions.

As world leaders ponder over solutions to lift the Russian blockade in the Black Sea, Lithuania’s Foreign Minister Gabrielius Landsbergis proposed to create a naval mission involving a “coalition of the willing,” which would protect Ukrainian ships from Russian missiles and in turn enable the export of Ukrainian grains across the Black Sea.

“In this endeavor military ships or planes or both would be used to ensure that the grain supplies can leave Odesa safely and reach the Bosporus without Russian interference. We would need a coalition of the willing — countries with significant naval power to protect the shipping lanes, and countries that are affected by this,” he said in an interview with the Guardian last week.

“This would be a non-military humanitarian mission and is not comparable with a no-fly zone,” he added.

So far, Landsbergis’ proposal has been cautiously welcomed by the UK, with the country’s foreign secretary Liss Truss saying that the UK would send naval convoys to join the escort if practicalities like de-mining Odesa’s harbor could be sorted.

“What we need to do is deal with this global food security issue and the UK is working on an urgent solution to get the grain out of Ukraine,” Truss said.

Harry Nedelcu, Director of Policy at Rasmussen Global who is also in charge of the organization’s Free Ukraine Task Force, told DW that the Lithuanian proposal is a good way to think of how to break the blockade on the Black Sea. Rasmussen Global is a political consultancy firm founded by former NATO Secretary General Anders Fogh Rasmussen.

“When you look at the Black Sea and the ships that Russia has there, we’re talking about a few dozen ships, including submarines. So another option to lift the blockade is for countries to give Ukraine more sophisticated modern weapons to sink these Russian ships. Then there will be no blockade and they can just send their grain vessels right through,” Nedelcu said.

With the Kremlin repeatedly criticizing NATO’s eastward expansion, Lithuania’s foreign minister Landsbergis also stressed that NATO, the world’s largest defense alliance, would not be a part of such a naval mission in the Black Sea.

Ian Anthony, Director of the European Security Programme at the Stockholm International Peace Research Institute (SIPRI), pointed out that there have been many occasions when NATO countries have carried out naval cooperation missions in their national capacities, outside the framework of NATO.

Moreover, the Lithuanian minister also suggested that besides the UK, countries affected by the loss of grain from Ukraine, like Egypt, could play a role in sending their ships to escort Ukrainian vessels carrying grains.

In a report for SIPRI from early May, Anthony also explained how the United Nations could organize an international fleet involving multiple countries like China and India to provide ships to assist in lifting the blockade.

“In my opinion, ideally the naval convoys would be made up of ships from multiple nations, including countries which have the most at stake in terms of food security. They will play a role in protecting the vessels carrying Ukrainian grain as they cross the Black Sea,” he told DW.

While nations like China and India have abstained from condemning Russia’s invasion of Ukraine in the UN, Anthony reiterated to DW that if the international naval mission was framed as a humanitarian mission to reduce food insecurity, he sees no reason why countries would not support it.

Moreover, he explained that in this naval mission, it would be important for Turkey to play an integral role since it guards the entrance to the Black Sea.

The Montreux Convention governs the Bosporus and Dardanelles in Turkey and regulates maritime traffic in the Black Sea. Anthony also explained, however, that even during war there are certain cases where Turkey doesn’t have to close the straits to warships.

“One is where Turkey is an active participant in the war. That’s obviously not going to happen. But the second is where Turkey declares itself to be in immediate danger. Turkey is one of the countries which is dependent on food imports, So the food security crisis is already having an impact in Turkey and it’s something which can promote civil unrest,” Anthony said.

“So Turkey would have to say ‘We regard the situation as an imminent danger to Turkish national security.’ Under those circumstances, they would be able to permit military vessels going through the straits under the convention, which could play a role in this naval mission to lift the blockade,” he added.

Nedeclu pointed out that while it is too early to speculate which countries will consider taking part in this naval escort, the thought of them even considering it sends a signal to Russia that what they are doing is now affecting the entire world and not only Ukraine.