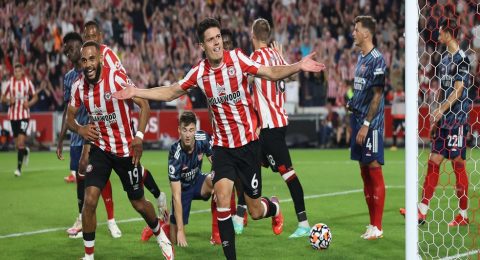 The Bees, promoted via the play-offs last season, have finally come full circle as their last match in the top-flight, in May 1947, was a 1-0 home defeat against Arsenal.

Seventy-four years is a long time to wait to get your own back and the Community Stadium —— which opened a year ago amidst lockdown —— was rocking.

This is as 16,479 fans, most of whom were not able to witness their promotion, finally got the chance to celebrate.

Arsenal’s day started badly when Aubameyang and Lacazette went down with illness.

With Thomas Partey and Gabriel also absent, it was a far more callow Gunners side than manager Mikel Arteta had probably envisaged starting the season with.

Brentford are hardly full of Premier League experience themselves.

Only Canos and Toney have played in it —- for a combined total of 19 minutes for Liverpool and Newcastle United, five years ago.

Toney, who scored 33 goals in the Sky Bet Championship last season, almost created their first in the Premier League when he sent Bryan Mbeumo racing through.

Mbeumo’s angled drive beat the dive of Arsenal goalkeeper Bernd Leno only to crash back off the near post.

Brentford did not have to wait long to open their account, however.

When Calum Chambers hacked the ball off the byline, it came back via Ethan Pinnock to Canos, who cut inside the defender and buried a low shot inside Leno’s near post.

Mbeumo was clearly enjoying himself on the big stage and he skipped away from both Pablo Mari and debutant Ben White in the area only to drag his shot wide.

Arsenal did not have a sniff of a chance until first-half stoppage time.

That was quickly snuffed out as Pinnock, who was playing for Dulwich Hamlet five years ago, dived in to block Nicolas Pepe’s effort.

They started the second half brighter and Emile Smith Rowe’s smart turn on the halfway line allowed him a run at goal.

But his shot was too close to Bees goalkeeper David Raya.

Arteta sent on England winger Bukayo Saka on the hour to inject some life into his side, and Gabriel Martinelli immediately headed narrowly over from a corner-kick.

But Brentford were not finished and Leno beat away another Canos shot before getting down well to deny Mbeumo.

They doubled their lead with 15 minutes remaining, but it was a dreadful goal for Arsenal to concede.

They criminally allowed a long throw from Mads Bech Sorensen to bounce in the six-yard box and Norgaard arrived at the far post to head into an empty net.

The stadium went wild, the Brentford fans’ usual self-deprecating song “we’re just a bus stop in Hounslow” now being interspersed with “we’re top of the league”.

They might not stay there for long, but Brentford have already shown they will be a force to be reckoned with in the Premier League this season.(dpa/NAN