Brokers Educates Police On How To Detect Fake Insurance 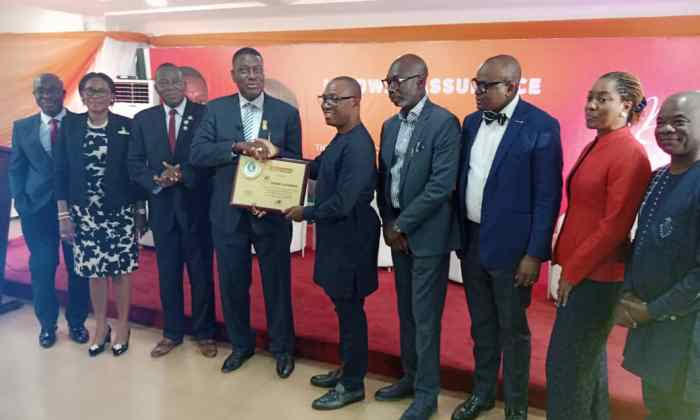 The Nigerian Council of Registered Insurance Brokers, NCRIB, has begun serious engagement with the Police in Nigeria, to update them on various insurance products and services by insurance companies n the country.

The new collaboration is also intended to help deepen insurance awareness in Nigeria.

The partnership, according to NCRIB, will give them (Brokers) the opportunity to update the Police about insurance business in the country.

The President of NCRIB, Mr. Rotimi Edu, informed the Commissioner of Police, Lagos State Command, Mr. Abiodun Alabi, who was a special guest and represented by the Police Public Relations Officer (PRO), Mr. Benjamin Udenyi, at the August edition of the NCRIB Members’ Evening held in Lagos yesterday, that NCRIB would like to engage Police in that regard.

Edu said the collaboration will avail NCRIB the opportunity to update the police on the situation in insurance industry.

According to Edu, with what we have observed, some of the Police do not know which insurance company is defunct and those that are still functional. They don’t know which document is issued by touts at the local government office and those issued by registered insurance brokers and underwriters.

“We know that the Nigerian Police Force (NPF) has a very good formation structure. We can latch on these formations through collaboration with the police to extend our awareness to the Police, to keep them abreast with the happenings in the industry; update them with the list of functional insurance companies that will help them in carrying out their duties. Insurance is also a security document. We would have wished the Commissioner of Police to be here himself because there are some information here we would have loved to share with him. But I know very well that as the Police Public Relations Officer (PRO), you will take this message back to the Commissioner of Police.

“We will like to collaborate with the Police. We are aware that on daily basis the police carry out a brief parade before setting out for duties. We can utilize that period to send out people to various formations within the state to speak to the men and women of the Police Force on the developments in the insurance industry.” Edu promised.

Speaking further, he said “during the brief talk, the Police can ask questions about insurance and through the responses they will get from insurance professionals, it will help broaden their knowledge of insurance.

“Secondly, it is about what the brokers or the underwriters faced when they go to the Police for Police report when there is a claim which is part of the required document by law, and when they see huge some of amount involved, because some of them do not know that the money is a premium paid to insurance companies by policyholders, and does not belong to insurance company or brokers. This is the area we want to collaborate with the police – to sensitize them on the working of insurance.

“Again, if you have a training programme in your various formations, we can also leverage on that to talk to your member. We are going to write to the Commissioner of Police officially on this. We will work hand in hand with the underwriters to set up a committee to handle this on our own side to facilitate the commencement of this initiative,” NCRIB boss added.

The August edition of the NCRIB members’ evening was hosted by Leadway Assurance Limited.