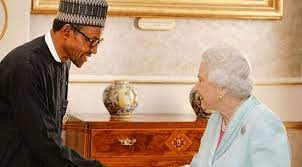 The death on Thursday of Queen Elizabeth II has prompted exponential outpouring of condolences from leaders around the world.

President Muhammadu Buhari received with immense sadness news of the passing of Queen Elizabeth ll of the United Kingdom.

The Nigerian leader made his feelings known in a condolence message issued by his spokesman, Malam Garba Shehu, on Thursday.

He said ”My family and I, and the more than 200 million Nigerians have learned with immense sadness of the passing of the Queen and the end of her unique and wonderful 70-year reign.

”Her late Majesty was the only British Sovereign known to 90 per cent of our population.

“Our thoughts and sincere condolences are with the Royal Family and the people of the United Kingdom and the entire Commonwealth as we join the entire world in mourning her loss.

”The story of modern Nigeria will never be complete without a chapter on Queen Elizabeth ll, a towering global personality and an outstanding leader.

”She dedicated her life to making her nation, the Commonwealth and the entire world a better place.”

The president welcomed ”Your Majesty’s ascension to the throne in line with tradition,” Shehu said.

He prayed King Charles the Third’s reign would witness the ”continuing robust and sisterly relations between our two nations.

Other Presidents, prime ministers and fellow monarchs all paid tribute to the queen, Britain’s longest-serving monarch.

At 96, she remained one of the world’s most recognizable people, her image a symbol of the nation both at home and abroad.

Her personality remained an enigma to many of her subjects, but she was famous for her sense of duty and took part in hundreds of public engagements a year.

Indian Prime Minister Narendra Modi said on Twitter that he would never forget the queen’s “warmth and kindness.”

“During one of the meetings she showed me the handkerchief Mahatma Gandhi gifted her on her wedding,” he said. “I will always cherish that gesture.”

French President Emmanuel Macron, also on Twitter, said that he would “remember her as a friend of France, a kind-hearted queen who left a lasting impression on her country and her century.”

United Nations Secretary General António Guterres mourned her loss in a statement, saying she was a “reassuring presence throughout decades of sweeping change, including the decolonization of Africa and Asia and the evolution of the Commonwealth.”

The Commonwealth is a group of states that includes the United Kingdom and many of its former territories.

In a statement addressed to the new king, Charles III, South African President Cyril Ramaphosa “ expressed his profound and sincere condolences” for the queen’s death.

“Her Majesty was an extraordinary and world-renowned public figure who lived a remarkable life. Her life and legacy will be fondly remembered by many around the world,” Ramaphosa said.

Dickie Arbiter, a former press secretary for the queen, said her legacy would be one of “stability and continuity” and that thanks to her lengthy stewardship, Britain has a monarchy that is “world-recognized.”

Elizabeth served for 70 years and for most Britons, she was the only monarch they ever knew.

Robert Hardman, author of “Queen of the World,” said she may be remembered in the pantheon of British monarchs as the first to reverse 1,000 years of accepted royal practice that a monarch’s job is to consolidate or conquer or expand territory.

In the queen’s case, she came to the throne “with the specific expectation that she would hand stuff back, withdraw, reduce Britain’s footprint,” Hardman said. “It’s been a lifelong exercise in managed decline.”

She did preside over the dramatic decline of the British Empire and during her reign, several countries removed the queen as head of state. Others, such as Australia and Jamaica, actively debated replacing her as their sovereign.

In Jamaica, a Commonwealth realm, Prime Minister Andrew Holness, said the country was praying for Elizabeth’s family “and the people of the United Kingdom, as they grieve the loss of their beloved Queen and matriarch.”

Earlier this year, when Prince William and his wife, Catherine, visited Jamaica, they were met with protests over the legacy of colonialism and calls for reparations from Britain for its involvement in the slave trade.

Elizabeth was the first British sovereign to visit Australia, another Commonwealth realm where roughly 1 million people greeted her in Sydney during her first royal tour with Prince Philip in 1954.

“She celebrated our good times, she stood with us in the bad,” Prime Minister Anthony Albanese said in a statement.

Irish President Michael D. Higgins also paid tribute to “her warm and enduring friendship” in a statement and described her landmark 2011 visit as “pivotal in laying a firm basis for an authentic and ethical understanding between our peoples.”

Hugo Vickers, a royal biographer, said that the queen “bestowed an atmosphere of calm over a very fast-changing world” and was an “extraordinary conciliator.