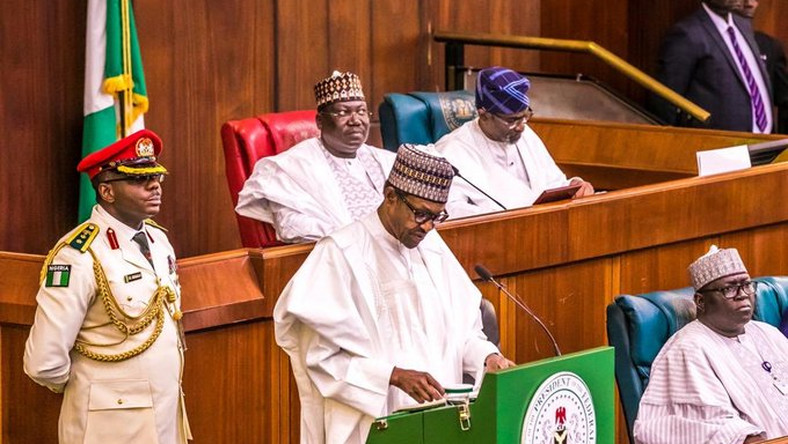 President Muhammadu Buhari yesterday presented a budget estimate of N10.33 trillion for the year 2020 to a joint session of the National Assembly.

While giving a breakdown of the budget estimates, Buhari said N556.7 billion was for statutory transfers, N4.88 trillion for non-debt recurrent expenditure and N2.14 trillion for capital expenditure.

He added that the budgetary allocation to the National Human Rights Commission was raised from N1.5 billion to N2.5 billion.

This, the President noted, represents 67 per cent increase in funding to enable the Commission performs its functions more effectively.

According to him, the “increase reflects the new minimum wage as well as our proposals to improve remuneration and welfare of our Police and Armed Forces.”

He disclosed that the 2020-2022 Medium Term Expenditure Framework (MTEF) and Fiscal Strategy Paper (FSP) set out the parameters for the 2020 Budget.

“We have adopted a conservative oil price benchmark of US$57 per barrel, daily oil production estimate of 2.18 mbpd and an exchange rate of N305 per US Dollar for 2020.

“We expect enhanced real GDP growth of 2.93 per cent in 2020, driven largely by non-oil output, as economic diversification accelerates, and the enabling business environment improves. However, inflation is expected to remain slightly above single digits in 2020,” he added.

President Buhari said a draft Finance Bill, which accompanied the 2020 budget, proposes an increase of the VAT rate from 5 per cent to 7.5 per cent.

According to him, the 2020 Appropriation Bill is based on the new VAT rate with additional revenues used to fund health, education and infrastructure programmes.

He, however, said that States and Local Governments were allocated 85 per cent of all VAT revenues.