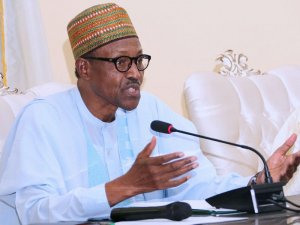 The Lagos Chamber of Commerce and Industry, LCCI, has said that though there were noticeable economic policy shifts in the Muhammadu Buhari’s administration expectations of the People were not really met as a result of snail pace in policy making and implementation.

In a major review of the four years of the administration, the LCCI director general, DG, Muda Yusuf said the regime came on board with an exceptionally high goodwill and with very high expectations from the citizens, but the expectations weakened soon after as the regime was up to a slow start, from an economic management perspective.

The key reforms, especially in respect of the petroleum industry and the infrastructure sectors were also slow in coming, Yusuf said and that also the decline in oil price and the activities of the militants in the Niger Delta regrettably compounded the economic challenges of the country in the first two years of the regime, culminating in a recession in 2016.

However, the economy came out of recession soon after in 2017 following the recovery of oil price.

According to him, The Pace of reforms in the oil and gas sector remained painfully slow over the past four years.  The Petroleum Industry Bill [PIB] was stalled, impeding the progress of the sector.  In the upstream segment, contracting processes under the joint venture partnership took between 12 – 36 months.  This was a major problem for investors in the sector. This is one reason that no new investors are coming into the sector.

The downstream was equally plagued by the excessive regulation which made it difficult to unlock the huge potentials of the oil and gas sector.

He said that it is desirable to fully liberalize the sector so that investors can inject the needed private capital.

“The price cap on the petroleum products and the dominance of the state-owned oil company [NNPC] had practically crowded out the private sector in the downstream oil sector. The economy is currently faced with a monopoly situation as far as the downstream petroleum sector is concerned.

There is a huge potential for investment, jobs, capital and revenue to be unlocked in the sector through appropriate reforms.

The DG also noted that Nigeria’s economy grew by about 4 per cent in the first quarter of 2015, but in the subsequent quarters, the economy witnessed a downward trend, reaching a low of -2.3 per cent in 2016 Q3.

He however attributed this to sharp decline in oil price and oil production, adding that the economy has since recovered from the recession and now on a growth path.

Speaking further he said, “The annual average growth from the first quarter of 2015 till date is 1.05 per cent, and the Latest GDP report indicate a growth of 2.0 per cent in first quarter. The growth performance over the past four years has been fragile driven largely by the non-oil sector which is itself grappling with severe productivity issues resulting from the huge deficit in infrastructure.  This underscores the need for urgent economic diversification anchored on improved productivity across sectors and structural reforms

On Policy Framework, Yusuf said that the absence of an economic blueprint was a major concern in the early days of the administration, creating challenges of uncertainty.

“However, the Economic Recovery and Growth Plan [ERGP] launched in April 2017 by the President provided clearer economic policy direction of the administration.  This enhanced the level of investors’ confidence and diminished uncertainties. The indications were that the government was committed to the implementation of the plan.  The establishment of the Presidential Enabling Business Environment Council [PEBEC] gave a boost to investors’ confidence.   The fact the body was chaired by the Vice President reflects the political will of the government to drive its activities.  The Executive Orders provided further proof of government commitment to fostering an enabling environment for investors. However, there are concerns about the extent of compliance with the executive orders.”

Also he noted that the The forex policy was one of the major challenges faced by investors in the first two years of the administration as there were issues of uncertainty, volatility of exchange rate, roundtripping which resulted from the huge differentials in the rates, multiplicity of rates, acute liquidity crises which adversely affected investors’ confidence.

However, subsequent reforms in the forex market palliated these problems.  Subsequent upswing in oil price and increase in oil output brought a great deal of calm and relief to the forex market.

The forex regime is moving close to a market driven framework in line with the pointers in the ERGP.  The frequent injection of liquidity by the CBN moderated the volatility of the rates and improved forex liquidity.  The forex policy reviews, especially the creation of the investors and exporters windows, are impacting positively on forex inflows and boosting the fortunes of the stock market.  Although there is still some fine-tuning to be done, the forex regime is heading in the right direction.

Yusuf also noted that the National Debt grew from N12.6 trillion or US$65.4 billion in 2015 to N24.3 trillion or $79.4 billion in 2018.  “This represents an increase of 93%; an estimated 15% of these are owed by the states.  In the 2019 budget, debt service provision was N2.14 trillion; capital expenditure provision was N2.9 trillion and estimated revenue for the federal government was N6.97 trillion.  This implies that debt service as a percentage of revenue was 30.7%; and debt service as a percentage of capital budget was 73.8%.  This is quite instructive and raises the critical issue of the sustainability of current debt profile.

It underscores the high opportunity cost of debt servicing to the Nigerian economy. Besides, the debt profile has the profound crowding out effect on the private sector. While banking sector credit to government have been increasing over the past few years, banking credits to the private sector has been on the decline.

The dynamics of the debt market has become a constraining factor on the financial intermediation role of the banking industry, and this is a scenario that is detrimental to wealth creation and employment generation in the Nigeria economy, he said.

“The good news, however, is that the Central Bank at its last MPC meeting has resolved to take steps to reduce the access of the banking sector to investments in government debt instruments.  This is a welcome development for which the CBN should be commended.”, he said

The manufacturing sector experienced some major challenges during the past four years, according to the DG. “The factors were both external and domestic. The main external factor was the collapse of oil price which affected forex availability and triggered sharp exchange rate depreciation in the first half of the administration.  However, the policy component of the problem resulted largely from foreign exchange policy choices which aggravated the problem of forex liquidity.  The restriction of 41 items from access to interbank forex market added to the plight of some manufacturing firms. The forex situation had since eased from the second half of the administration with remarkable improvement in forex liquidity in the economy and notable stability in the rates.

The high deficit in infrastructure, the gridlock at the Lagos ports, high interest rate and unfair competition from imported products were also factors that constrained the growth of the industrial sector during the review period.   High energy cost continued to impede the competitiveness of the sector. The import dependent nature of the Nigerian manufacturing sector also posed considerable adjustment challenges for the sector over the past four years.

However, segments of the manufacturing sector that had substantial backward integration capabilities had good leverage during the review period. These were firms that were able to sustain production and operations from substantial local inputs.  Such firms became more competitive, more sustainable and profitable. They were largely in the food and beverage categories.”

On the Agricultural Sector, he observed that the sector gained significant government support especially in funding, especially rice farming and processing, but stated that , the pace of mechanization is still low which is why is why food prices remain an issue in the country.  “It is only mechanized agriculture that can guarantee food security in a country with an estimated population of 200 million.  The protracted challenge of insecurity took its toll on the agricultural production in the country, especially in the last two years of the administration. “, he said