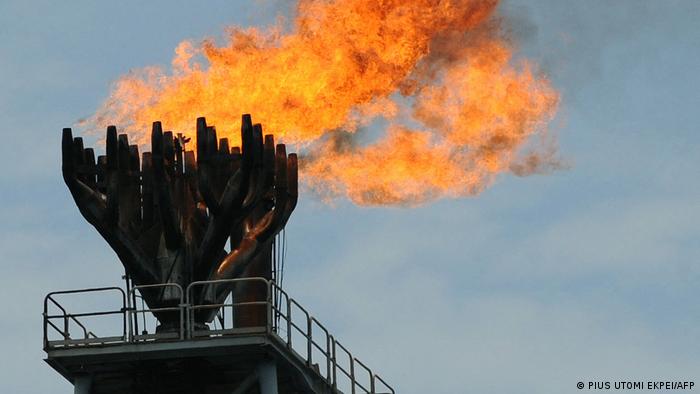 As the war in Ukraine rages on, the European Union is desperately searching for alternative energy sources. Africa has abundant reserves, but experts say the continent’s energy sector needs urgent reforms and help.

Africa has abundant reserves but lacks adequate infrastructure and investment

EU nations have considered cutting off import of Russia’s oil and gas following President Vladimir Putin’s invasion of Ukraine, which began on February 24.

To avoid self-inflicting punishments to its economies, the EU is deliberating medium- and long-term solutions to replace the average 380 million cubic meters per day of Liquefied Natural Gas (LNG) from Russia. This amounts to 140 billion cubic meters or 45% of almost the EU’s total gas consumption a year.

The trade agreements come as the price of Brent crude oil, a major benchmark price for oil purchases worldwide, continues to soar sharply.

The African continent has abundant oil and gas reserves. In 2017, Africa reportedly had 148.6 trillion cubic meters of proven gas reserves — more than 7% of the global reserves.

In 2019, the European Union imported about 108 billion cubic meters of LNG from Africa, over 12 billion of which came from Nigeria.

“[African producers] have more reserves than needed for their own market and are therefore predestined for export,” Khadi Camara, from the German-African Business Association, told DW.

In 2019, Nigeria led crude oil exports in Africa, with more than 2 million barrels per day of oil sold on the international market.

As of 2020, Africa’s contribution to global oil exports reached nearly 9%.

“For African countries to plug the gap, they will have to have spare capacity of at least 7.4 million barrels per day, according to a Nigerian energy broker who asked to be identified by the pseudonym Chinedu Olayinka because, he said, discussing such matters could make him a target. “They don’t have this capacity and are not even close to it,” he said.

“Both Angola and Nigeria, the top two producers in Africa, are not even close to meeting their OPEC quotas, how much more spare capacity,” Olayinka posed.

He said Nigeria only managed to pump 94% of its 1.7 million-barrel-per day quota. Likewise, Angola pumped only 78% of its quota of 1.4 million barrels per day.

“If the leading African producers cannot even meet their quotas, there is no way they can fill the supply gap left by Russia in the short term. Moreover, they have also been struggling with attracting new investment in oil production, so they may not even be able to help fill that gap in the medium term,” Olayinka noted.

That is, however, only part of the problem. African leaders differ on the global response to Russia’s invasion of Ukraine, which has seen the price of oil and gas skyrocket.

On March 2, the UN General Assembly in New York voted on a resolution calling for Russian troops to withdraw from Ukraine “immediately, completely and unconditionally.”

Though 28 out of 54 African countries sided with Ukraine, the rest, save Eritrea which voted against the resolution, either abstained or chose not to turn up to vote.

For the first time in a long while, these political differences showed that African Union member states could not speak with one voice at the United Nations.

Last week, a German-African business advocacy group asked Habeck to reach out to his African counterparts for the continent to increase its supply. However, no African leader has expressed public interest in meeting the Europeans.

When the European Union presses its crisis-level panic button, member states could begin to hoard their remaining supply of refined fuel, which could deal a devastating blow to the African continent, which relies on EU refineries to move people, vehicles and machines.

Africa’s hesitance to commit to pumping more oil and natural gas could also be related to the continent’s lack of pipeline infrastructure to transport energy to Europe quickly.

According to statistics from the South Africa branch of PwC, challenges have meant that oil production in Africa significantly decreased in 2019 by 19% from the previous year. This accounts for 7.8% of the global output. In addition, gas production saw a slight decline of 5% compared with the year earlier.

“Oil companies can get much more favorable financial terms and easier operating environments if they invest in new oil production outside Africa,” Olayinka said.

“So, to be able to attract investment, Nigeria, Angola and other African producers must significantly improve the financial incentives for oil firms to invest while also making it much easier for them to do business in the countries,” Olayinka said. “The same thing goes for other smaller oil producers like Congo and Equatorial Guinea.”

Since Russia invaded Ukraine, Africa’s largest gas exporter to the European Union, Algeria, has expressed a willingness to increase natural gas and LNG exports. There are currently four pipelines that transport gas from Africa to Europe directly. However, these are all located in North Africa. The major hurdle is building new infrastructure in sub-Saharan Africa to connect with the existing network in North Africa.

Olayinka said that, for Africa to reach a short-term solution, the continent needs to amend the fiscal regimes that allow oil companies to make more money from their investments. He also emphasized the need for Africa to ramp out issues such as corruption and crude oil theft, and remove as much red tape as possible. In addition, he said, countries that consume lots of oil such as Germany and China ought to sign special bilateral deals in which the consumer countries invest in the energy sector of the producer countries.-DW