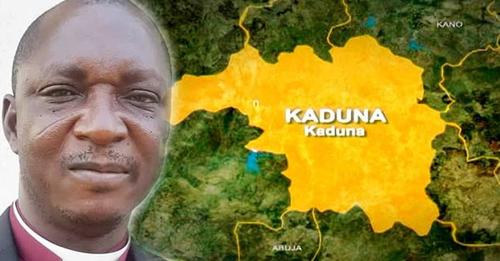 The Christian Association of Nigeria, CAN, in Kaduna State has distanced itself from one Pastor Ade Abrahaman offering to take his members to heaven if they pay a ticket fee of N310,000.

Pastor Ade Abrahaman, whose video had gone viral on social media, initially operates from Kaduna and later moved the camp to Ado-Ekiti where he’s presently staying with his members preparing them for heaven.

However, the state CAN Chairman, Reverend John Hayab, in a statement in Kaduna on Tuesday, denied neither knowing the said pastor nor the location as well as the name of the church in any part of the 23 local government areas of the state.

According to the chairman, a faceless character like Ade can easily give the faith of the community a bad name especially as the body of Christian in the state cannot even trace his whereabouts or information about the church in the state.

Hayab wondered why such a pastor could exist in the state without anybody or the association knowing him, only to read about his drama in the media.

He urged Christians to shine their eyes in order to not fall victim to any pranks.

He also appealed to whoever know the said pastor or the location of his church in the state to link up with the association so that together with security agencies, they could prevent what could compound the security challenges in the state.

Although he added that the association could not decide what sermon priests could preach but noted that “CAN will not hesitate to expose fake preachers when she finds one.”

He admonished the Christian faithful not to rush into accepting every kind of teaching without first studying the scriptures.

Hayab, who is also the Vice-Chairman of the CAN in the northern state and Abuja, said “the attention of the CAN Kaduna State Chapter has been drawn to the news in circulation in some sections of the media about one Pastor described as Ade Abraham, offering to take his members to heaven if they pay a fee of N310,000.

“Even though Pastor Ade’s offer of a ticket to heaven is cheaper than the ransom Kaduna bandits ask their victims, sadly, CAN has not found anyone who knows the location of the said church or established a church in Kaduna town with that name or in any local government areas in the state.

“A faceless character like Ade Abraham can easily give the faith of the community a bad name, especially that CAN cannot trace his whereabouts or find any useful information about his being in Kaduna state.

“Is it possible that Ade Abraham before becoming spiritual had lived in Kaduna or did he come to Kaduna for a visit? How can we have such a pastor and nobody knows him only for us to read about his drama in the media whereas the journalists in Kaduna do not have this information?

“CAN Kaduna State appeals to whosoever knows pastor Ade Abraham or the location of a church in Kaduna linked to the alleged person to furnish our association with the information so that we could work with security agencies to prevent what could further compound the security challenges faced in the state.”

He added, “CAN will not decide what sermon her priests should preach but CAN will not hesitate to expose fake preachers when she finds one, especially when the sermon contradicts the teachings contained in the Holy Scriptures.

“CAN, therefore, calls for a proper investigation of Pastor Ade Abraham’s identity, and the location of his ministry to put the record straight to avoid creating panic and misleading the public.

“If Pastor Ade Abraham’s camp is in Ekiti and the sacred place where God is coming to rapture those who have paid their rapture fees, why is Kaduna in the story or does he have another strip that the rapture will happen in Kaduna?

“CAN wish to advise the Christian faith not to rush into accepting every kind of teaching without first studying the Scriptures to understand if what the preacher says is true like the Berean believers who studied the Scriptures, day and night, to confirm what the Apostle Paul was saying was true.

“May God deliver us from unholy preachers in Jesus’ name.”