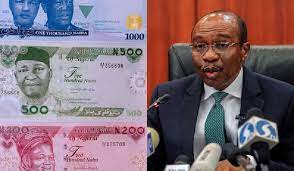 The Central Bank of Nigeria, CBN, has increased the amount of newly designed Naira notes to Commercial Banks after removing conditions earlier attached.

Governor of the Bank, Godwin Emefiele, has therefore urged Banks to pick up the new naira notes saying the CBN has waived some of the conditions for accessing the new banknotes.

Emefiele, made the call on Wednesday during a sensitisation tour on the redesigned naira notes at Computer Village, Ikeja in Lagos.

The Governor who was represented by the CBN Director of Legal Services Department, Mr. Kofo Salam-Alada, explained that Commercial Banks were given slots before but now, the CBN is bending over backwards to accommodate their demands.

He said, “We have been calling upon the banks to approach the Central Bank of Nigeria across the country to come and pick up the new notes; we have even waived some of the conditionality for accessing currency notes to accommodate the banks.

“The banks were being given slots before, but now the Central Bank of Nigeria is bending over backwards to accommodate the demands of the banks to service them so that they can service you and so that everybody will have access to the new naira notes.”

The CBN Governor also revealed that it is monitoring the use of Automated Teller Machines (ATMs) to ensure that they stopped paying customers the new naira notes over the counter but via the ATMs.

He said, “Part of what we are doing is that we have monitors going around the banks now, I have been to some ATMs this morning and I’ve lodged a report and I’ve spoken to the management of the various banks.”

He added that penalties await any bank that fails to come and pick up the new notes. Also, failure to lodge money into their ATMs will attract fines.