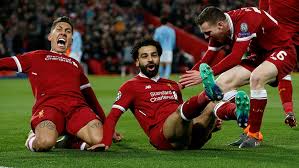 Manchester City will be looking to overturn a three-goal deficit, to book their place in only their second ever Champions League semi-final on Tuesday evening.

It’s been a week to forget for the Citizens, following local rivals Man United temporarily halting their title party for another week with a shock 3-2 win at the Etihad on Saturday evening.

As for Liverpool, they had their own local derby to contend with although a 0-0 with Everton and a much-changed squad failed to live up to expectations.

Klopp will be sweating on the fitness of star man Mohammed Salah.

The Egyptian scored the opener on Tuesday but limped off with a groin complaint.

After being rested against Everton he will be expected to be fit for the match in Manchester. Broadly speaking Klopp will be pleased with the performance of his side last Wednesday and will likely go with the same side for the return leg. Just one away goal for Liverpool will mean that Man City will have to score five to have any chance of progression.

Manchester City should welcome back top-goalscorer Sergio Aguero into the side after the Argentine striker made a second-half appearance against United at the weekend. The Citizens need goals and are likely to go with a front three of Sterling, Aguero, Sané as they look to chase down Liverpool’s three-goal lead.