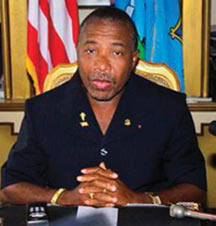 The ex-wife of former Liberian President Charles Taylor has denied torture charges in a court in London, the Press Association reports.

Agnes Taylor, 52, was arrested in the UK more than a year ago, and appeared in court via video link from Bronzefield prison.

She pleaded not guilty to seven charges of torture and an eighth charge of conspiracy to torture, PA reports.

She is accused of committing the crimes during Liberia’s civil war 28 years ago.

Charles Taylor is serving a 50-year sentence in a UK prison for supporting rebels who committed atrocities in neighbouring Sierra Leone.