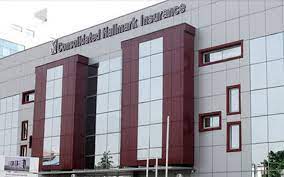 The Consolidated Hallmark Insurance (CHI) Plc, has rewarded six winners of its 2021 Annual National Essay Competition, in line with its commitment to enhancing insurance education and awareness, through Corporate Social Responsibility (CSR).

The winners, emerged in the 11th edition of the competition which started in 2011 with two categories comprising of Internal and External.

This, according to the firm, is part of its contribution towards insurance education and breeding human capital for insurance industry in the country.

The external category saw entries from previous winners of the competition, but are now working in Consolidated Hallmark and were given “Insecurity In the Nation: Threat and Opportunities for Insurers,” as a topic while the internal category witnessed entries from some higher institutions across the country with “Remote Working Model: Readiness of the Nigerian Insurance Industry,” as topic to write on.

In the external category, however, the 2021 competition saw Ms. Oluwaseyi Victoria Ajemunigbohun from the Insurance Department of the Lagos State Polytechnic (LASPOTECH) emerged the winner , thereby, went home with a cheque of N250,000, while Ms. Ifeoluwa Olaseni Oyefejo emerged second, hence, rewarded with a cheque of N150,000.

Oluwatobi Emmanuel Akujobi, however, came third with a prize of N100,000.

The assessment process, he said, has assessors drawn from vital segments of the insurance industry – broking, underwriting, regulatory and the media, in an attempt to ensure a very objective outcome.

He noted that this panel graded the best entries received from the various Institutions while average scores are arrived at to determine the final winners in the three categories.

The managing director/CEO, Dendik, Mr. Niran Adewale, who is also one of the Assessors for the 2021 essay competition said, the level of thinking, awareness and the ability to proffer solutions to societal problems were what the assessors looked for in the entries submitted.

While praising those who did well in the competition, he added that, some equally performed woefully,hence, charging other corporate organisations to borrow a leaf from CHI gesture to increase human capital development, especially, for insurance industry.

On his part, the Group Managing Director/CEO, CHI Plc, Mr. Eddie Efekoha, who congratulated the winners, promised that, going forward, his insurance firm will sponsor the publishing of the winning article in a widely read national newspaper to celebrate the winner.

Stating that the Essay Competition is part of the company’s contribution to the overall insurance industry awareness creation, he added that, when the competition started earlier, winners were given automatic employment, but that, nowadays, employment may not be automatic as some may have to come in through the Graduate Trainee Programme of the company.

The Annual National Essay Competition, he said, commenced with the maiden edition in 2011 based on the insurer’s belief in developing talents and expanding the industry knowledge whilst encouraging research.

Efekoha said the topics of the competition were quite appropriate in view of pandemic and its impacts on business operations as some workers have to work remotely to achieve optimum result.

While believing that the pandemic is a threat but comes with opportunities for insurance industry, he said, the pandemic is gradually redefining the business model of underwriting firms across the country.

The second topic which focused on insecurity in the country, he said, is also apt because it dealt with the current challenge battling the country and opportunities in it for insurance industry.

“The Annual CHI Plc Essay Competition for Tertiary Institutions has since carved a niche for itself, and students of Insurance and Actually Science now increasingly look forward to participating in it. It is now an integral part of the company’s Corporate Social Responsibility(CSR) projects to which we shall continue to commit resources to,” he pointed out.

Earlier, the commissioner for Insurance/CEO, the National Insurance Commission(NAICOM), Sunday Thomas, had applauded the management of Consolidated Hallmark Insurance (CHI) Plc for this initiative, stating that, this will spread the gospel of insurance while deepening insurance education among students, in the long run.

Thomas, who was represented by a Director of NAICOM, Kenneth Egwu, said, the insurance company has shown leadership by using CSR to enhance human capital development.

He applauded the winners and called on them to continue to be good ambassadors of insurance industry wherever they are.