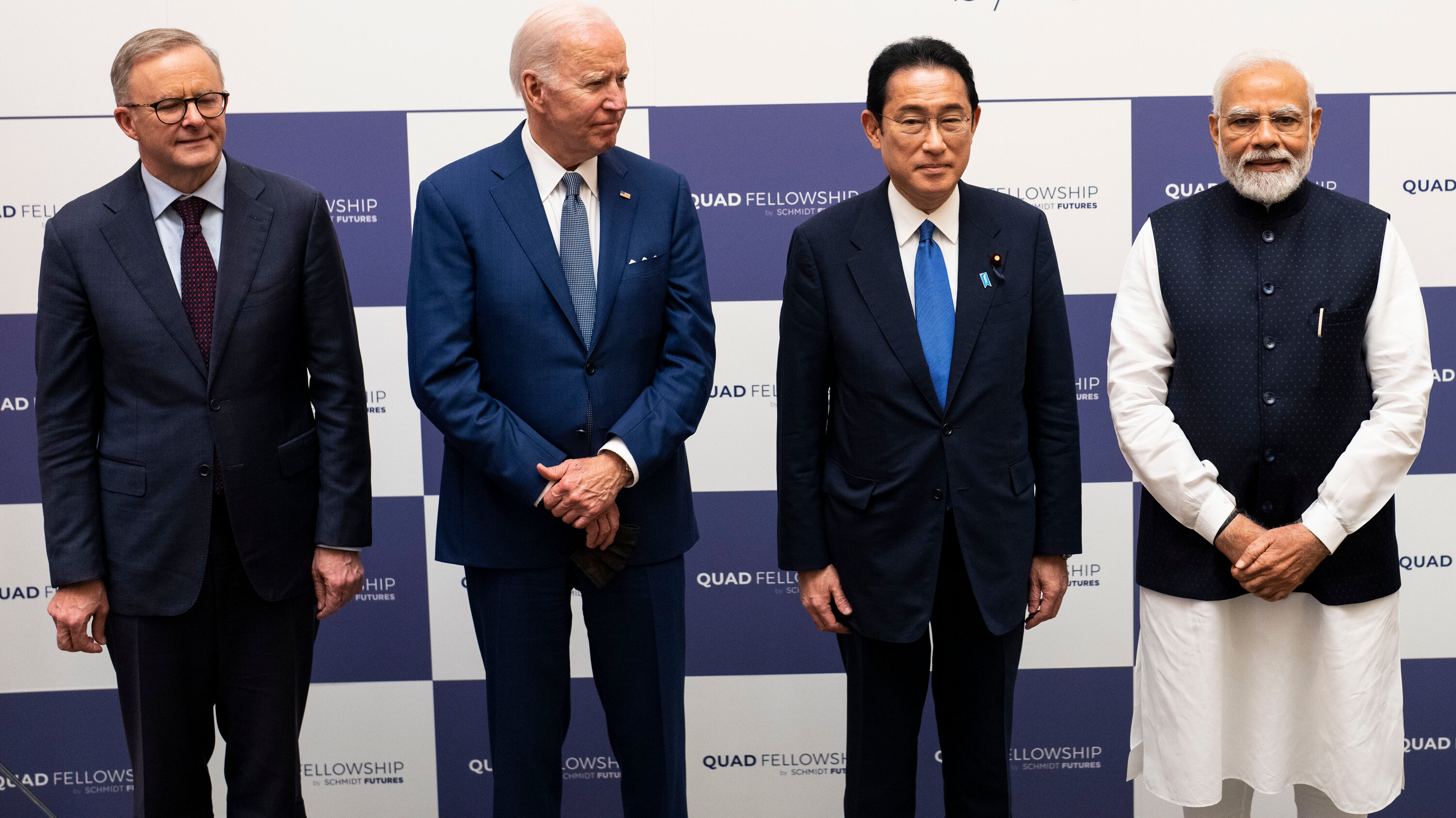 China and Russia on Tuesday held their first joint military exercise since Moscow’s invasion of Ukraine, sending bombers over the seas in northeast Asia in an apparent show of force as President Biden was visiting the region, according to American, South Korean and Japanese officials.

The U.S. government was tracking the military exercise as Mr. Biden met in Tokyo with the leaders of Australia, Japan and India, nations in the so-called Quad coalition that was formed in part to counter Chinese power in the Indo-Pacific region. The military activity was a significant sign that the partnership between China and Russia has not weakened even as the three-month-old war in Ukraine has resulted in thousands of civilian deaths.

The bombers flew over the Sea of Japan early Tuesday and continued south toward the East China Sea and the Philippine Sea, a senior American official said in an interview soon after the start of the exercise, speaking on the condition of anonymity. South Korea issued a statement hours later confirming the exercise, saying that two Chinese military aircraft and four Russian warplanes had entered its air defense identification zone off the country’s east coast, without intruding into its airspace. Joint exercises involving strategic bombers are complex and are typically planned well in advance.

The South Korean military dispatched fighter jets before the Chinese and Russian bombers entered the zone and “and took tactical measures to guard against emergencies,” it said in a statement. The Japanese military said it also sent fighter jets to warn the bombers and conduct surveillance when the Chinese and Russian warplanes flew in the vicinity of Japan’s airspace. They did not intrude into Japan’s territory, it said.

“We regard the military exercise conducted in the midst of the summit meeting between Japan, the United States, Australia and India as intending to show a demonstration of force against Japan, which hosted the meeting,” Nobuo Kishi, Japan’s defense minister, told reporters. “Also, the fact that this activity was held in the midst of the Quad summit meeting is deemed more provocative than other drills in the past.”

“When the international community is responding to Russia’s invasion of Ukraine, China is acting together with the aggressor, Russia,” he added. “We cannot help but be concerned about this and cannot overlook it.”

The Chinese defense ministry confirmed the exercise on an official social media account soon after South Korea and Japan released their statements.

Japan, South Korea and Australia have supported the United States and the European Union in their opposition to Russia’s invasion and are coordinating with those nations on sanctions against Russia. South Korea has announced it is decreasing its purchases of Russian oil. India, which has a decades-long strategic relationship with Russia and relies on Moscow for military equipment, has taken a neutral stand, and it has increased its purchases of Russian oil.

On Tuesday morning, at the start of the meetings among the Quad nation leaders, Prime Minister Fumio Kishida of Japan stressed the need to avoid potential conflicts in Asia when he spoke about the war in Ukraine while standing next to the other leaders.

“A grave incident which has fundamentally shaken the rule-of-law-based international order we value has happened since we met last September,” he said. “Russian invasion into Ukraine squarely challenges the principles which are enshrined in the United Nations Charter. We should never, ever allow a similar incident to happen in the Indo-Pacific.”

Beijing has sided with Moscow by giving it diplomatic and rhetorical support throughout the war. It has consistently denounced the North Atlantic Treaty Organization and repeated the assertions of President Vladimir V. Putin that the alliance’s enlargement is a threat to global stability and provoked him to invade Ukraine. It has also repeated Russian disinformation using official platforms, including a conspiracy theory about the Pentagon financing biological weapons labs in Ukraine.

Mr. Putin has tried to strengthen Russia’s ties with China as a like-minded nation standing in opposition to Western dominance. On Feb. 4, as Mr. Putin visited Beijing for the Winter Olympics and met with President Xi Jinping for the 38th time as national leaders, their governments issued a 5,000-word statement that declared the two nations had a “no limits” partnership.

Senior U.S. officials and a European official later said in interviews that a Western intelligence report had indicated that senior Chinese officials asked their Russian counterparts in early February to hold off on invading Ukraine until after the Olympics ended. The day after the closing ceremony, Mr. Putin declared that Ukraine should not be a sovereign state and ordered more units of the Russian military to cross into the embattled Donbas region of eastern Ukraine. The full-scale invasion began three days later.

In mid-March, U.S. officials said Russia had asked China for military and economic aid after the invasion of Ukraine. Russian ground forces have fared poorly in battles and skirmishes against the Ukrainian military, and Mr. Putin has decided to withdraw units from around Kyiv and other major cities and concentrate on taking the entire Donbas region. American officials say they have not detected any military or economic aid sent from China to Russia for the war.

China has also not stepped in to help Russia evade sanctions or blunt the impact of the penalties, U.S. officials say.

Chinese and Russian officials have been strengthening their military ties in recent years, and the two nations have been growing closer in part because of the highly personal bond between Mr. Xi and Mr. Putin. Both men are autocrats who harbor hostility toward the United States and aim to weaken American power.

China has been buying more advanced weapons from Russia, and the two nations have done a growing number of joint military exercises recently. Last October, the two countries held joint naval drills off the Russian Far East. This January, the two joined with Iran for the same type of exercises in the northern Indian Ocean.

The United States has been monitoring the rapid modernization of the People’s Liberation Army of China and its various forces. Russia’s invasion of Ukraine has provoked greater anxiety among some U.S. and European officials over the possibility that Beijing might decide to invade Taiwan. U.S. officials have been pushing Taiwan to order American-made weapons that they say would give Taiwan a fighting chance against a typical seaborne invasion.

On Monday, Mr. Biden said the United States would defend Taiwan militarily if China attacked the self-governing democratic island. U.S. officials said later that Mr. Biden was not changing a longstanding policy of “strategic ambiguity” on Taiwan and China in any way. That decades-old unwritten policy says the United States will remain silent on whether it would send military forces to defend Taiwan against China, even though the Taiwan Relations Act of 1979 obligates the U.S. government to provide weapons of a defensive nature to Taiwan.

They then joined four Russian planes, including two fighter jets and two Tu-95 bombers, off the east coast of the peninsula, it said. The six planes entered the South Korean zone there between 9:58 a.m. and 10:15 a.m. but did not enter South Korea’s territorial airspace, the officials said.

The joint Chinese and Russian exercise continued into Tuesday afternoon, when the South Korean military spotted a group of four Chinese military aircraft and two Russian warplanes patrolling together between South Korea’s southern island of Jeju and Japan’s southern Kyushu island before they split up.

In his opening remarks at the Tuesday meetings, Mr. Biden spoke of how he had once told Mr. Xi that the United States was committed to maintaining a dominant presence across Asia and the surrounding oceans.

“I was once asked by the leader of China why I kept talking about being an Indo-Pacific power,” he said. “And I said, ‘Because we are. We share the Pacific — one entire side of our country.’ And we have been deeply involved with all of you for a long time.”

FG Frowns At Rejection Of Nigerian Exports By U.K