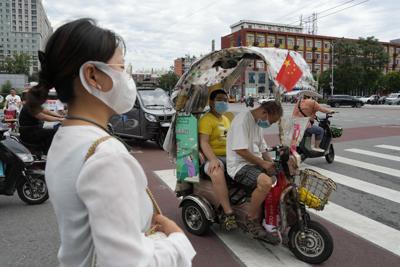 Exports rose 7 per cent over a year ago to $314.9 billion, decelerating from July’s 18 per cent expansion, customs data showed Wednesday. Imports contracted by 0.2 per cent to $235.5 billion, compared with the previous month’s already weak 2.3 per cent growth.

Demand for Chinese exports has softened as Western economies cool and the Federal Reserve and central banks in Europe and Asia raise interest rates to contain surging inflation. At home, repeated closures of Chinese cities to fight virus outbreaks has weighed on consumers’ willingness to spend.

“The slowdown in China’s export sector is adding to headwinds for the Chinese economy,” said Rajiv Biswas of S&P Global Market Intelligence in a report. Lack of import growth highlights “continued weakness of Chinese domestic demand.”

Growth in the world’s second-largest economy fell to 2.5 per cent in the first half of 2022, less than half the ruling Communist Party’s 5.5 per cent annual target, after Shanghai and other industrial centers were shut down to fight virus outbreaks.

Factories have reopened, but restrictions more recently in areas including the southern business center of Shenzhen weighed on activity. So has a dry summer that left reservoirs in the southwest unable to generate hydropower and disrupted river shipping.

China’s global trade surplus widened by 36.1 per cent over a year earlier to $79.4 billion, AP reports.

President Joe Biden has left in place tariff hikes imposed by his predecessor, Donald Trump, in a fight over Beijing’s technology development tactics. Beijing retaliated by raising its own import duties and told Chinese companies to stop buying American exports.

Envoys from the two sides talk by phone but have yet to announce a date to resume negotiations.

Imports from Russia, mostly oil and gas, surged 59.3 per cent to $11.2 billion as China appeared to take advantage of discounts offered by the Kremlin to attract buyers in the face of Western sanctions over its war on Ukraine.

China’s purchases of Russian energy irritate Washington and its allies but don’t violate sanctions on Moscow. Last year, China bought 20 per cent of Russian crude exports, according to the International Energy Agency.

Beijing declared ahead of the February invasion that it had a “no limits” friendship with Moscow. It criticizes the sanctions but has avoided helping President Vladimir Putin for fear of losing access to Western markets and the global banking system.