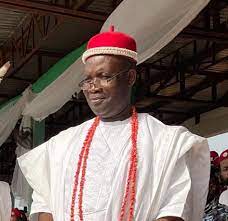 The Commerce and Industry Correspondents Association of Nigeria ( CICAN), has condoled with the good people of Omor Kingdom in Ayamelum Local Government Area of Anambra State, over the devastating flood that has ravaged the ancient kingdom and it’s environs.

This was contained in a statement jointly signed by the Association’s Chairman, Mr Charles Okonji on Tuesday, in Lagos.

The Association shared in the pains of the Omor Kingdom and it’s neighbours who has seen their houses, businesses and farmlands washed away by the heavy flood which has wrought heavy losses to Anambra State in particular and most parts of Nigeria in general.

The CICAN also consoled the community’s traditional ruler, His Royal Highness, Igwe Oranu Chris Chidume over the huge losses his subjects have recorded as a result of the incident at this particular difficult period in the history of the country.

The statement said, ” The entire CICAN family who are over 100 media practioners in Lagos, Abuja and other parts of the country are pained by the losses suffered by the good people of Omor kingdom and it’s neighbours. We share in your pains and grief at this very difficult time in the country’s history. We pray God to give your highness Igwd Oranu Chris Chidume and the good people of the Kingdom the fortitude and Grace to bear the irreparable losses incurred.

“We urge the people of the kingdom to take solace in the fact that God in heaven will not abandoned or forsake them at this trying and very difficult time economically and politically.

“We call on Governor Charles Soludo and the Anambra Stats Government to come to the aid of the Omor people by providing them with the needed relief materials to cushion their pains and also assist them to rebuild their lives,” the statement read.

Okonji however called on rich and good spirited individuals to come to the aid of the Omor people, urging the Federal Government to also assist the people who have lost their properties and livelihood with relief materials to rebuild their lives and houses again.