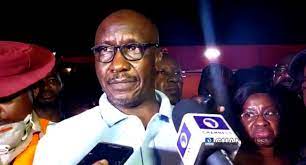 The Conference Of Nigeria Political Parties (CNPP) has raised concerns over the figures released by the Nigerian National Petroleum Company (NNPC) Limited on Tuesday as profit after tax.

Doubtful of the figure, the Conference therefore called for an independent investigation of the management of the company and its Board members in the last seven years.

But in a quick reaction, the CNPP, in a statement signed by its Secretary General, Chief Willy Ezugwu, said that “it is difficult for the NNPC Limited to convince patriotic Nigerians that its declared profits in two years are not manipulated.

“The CNPP calls for proper investigation of the management of the company and the Board of NNPC over the last seven years, particularly those who approved 2021 audited financial statements, declaring NNPC to have made the unimaginable 134.8% YoY profit growth in 2021.

“To point out a few reasons why the profits being declared annually by NNPC since 2020 are very doubtful, we note that in 2017, Nigerian lawmakers uncover alleged $15billion unremitted oil and gas revenue.

“According to the House Committee, trace of the alleged missing fund, believed to have been stolen and diverted to a foreign destination, was contained in two documents submitted by the then Nigerian National Petroleum Corporation, NNPC, at the committee’s sitting.

“Till date, nobody has been prosecuted and nobody was sacked.

“Again, by 2018, N4 trillion was reported to be unremitted by the NNPC as revealed in 2016 audit report indicating that some revenue collecting agencies in NNPC and DPR did not remit any revenue into the Federation account for some months, neither was any explanation given why those months recorded no revenue.

The Conference accused the “NNPC management of inability to keep accurate records let alone making huge profits as it has been declaring since the 2020 pandemic year.

“Therefore, the auditor held that the failure to properly separate these deliveries and charge directly to each company makes it difficult to reconcile and account for each lifting.

“Again, till date, nobody was queried and no person was sacked”, the CNPP observed.

“The House said it had discovered that over $900m was still “being held” by the MDAs outside the TSA.

“The House specifically accused the NNPC of extra-budgetary spending as the committee said that from the information submitted by NNPC itself, Brass LNG received an appropriation of $511.60m while the actual release was $461.54m during 2012-2017 fiscal years.

“The House Committee then observed that some MDAS claimed to have obtained a presidential exemption to operate certain accounts outside the TSA policy.

“In the case of NNPC, the committee insisted to sight the purported exemption letter. However, to the dismay of the committee, the letter was only conveying the approval of the President signed by an assistant director.

“The lawmakers also accused NNPC of financial operations outside the TSA, saying, “The balance in this (CBN Joint Venture) account as reported by the NNPC, dated 30th October, 2017, stood at $188,900,383.49. These are the various accounts classified as accounts still not being moved to TSA by CBN, DMBs account”

“The House committee had also discovered three accounts held by the NNPC in Aso Savings and Loans PLC and Unity Bank PLC where the accounts included two placement accounts called NNPC PFL Placement Deposit and the third account called NNPC Pension Fund account. The total balance in these accounts as of August 27, 2017, stood at N1, 079,444,746.49”, the CNPP quoted the committee.

“No fewer than 20 recommendations by the House Committee panel were unanimously approved by the House and till date, no official of NNPC was sacked even as none was prosecuted.

“According to a report by Nigeria Extractive Industries Transparency Initiative (NEITI) in 2021 and widely published in the media, a total of 77 oil companies were owing Nigeria N2.659trn unremitted funds.

“Besides the consistent revenue shortfall yearly, which resulted to Nigeria’s borrowing sprees to finance its huge budget deficit with debt servicing gulping as much as 98 per cent of Nigeria’s revenues, the NNPC was reported to have made a huge deduction of N149.2 billion from the federation’s joint account when the Federation Account Allocation Committee (FAAC) met in October 2021.

“If NNPC makes huge deductions from the Federation Account and often withholds Federal Government’s legitimate revenues, how is it possible for the same NNPC to be declaring profits for the second consecutive year?

“Or does the NNPC convert the unremitted revenues and deductions from Federal Accounts into profits?, the CNPP asked.

“The issue of oil theft was also mentioned by the NNPC Limited’s boss, Mallam Mele Kyari.

“He said that the oil spill in the Bodo community of Rivers State has led to the Nembe pipeline which is making the country loose over 100,000 barrels per day, while lamenting the high rate of oil theft in the country.

“For the CNPP, we believe that the NNPC knows those behind oil theft and they should go after them instead of mouthing that it has heavily invested in securing its facilities in the oil-rich region.

“If they don’t know, they should see human rights lawyer, Femi Falana (SAN) who recently said that they have all information relating to stolen Nigerian crude oil. The lawyer recently pledged to make available such information if needed by the Federal government”, the CNPP stated.

“As far as the CNPP is concerned, rather than continuing the fruitless policy of destroying hundreds of thousands of illegal refineries operating in the Niger Delta for these years, the NNPC should set up criteria for both standardising the operations of the legal refineries operators and licencing them as modular refineries operators in the region to save Nigeria billions of dollars wasted on importation of refined petroleum products due to ineffective government refining facilities.

“But such ideas as local refining of crude oil can never be welcomed by the NNPC management and Board who could be the ultimate beneficiaries of the sustained fuel subsidy regime that has been severally adjudged as the most corrupt in the world even by the All Progressives Congress (APC) before it came to power in 2015.

“NNPC management would rather invest in endless and wasteful turnaround maintenance of Nigeria’s expired refineries instead of building modern refineries, at least one refinery in the last seven years of the APC administration.

“Until NNPC management is made to answer all questions relating to unremitted revenues and its corruption-infested subsidy regime, the CNPP will consider any profit declared by the NNPC management as mere paperwork and, most likely, a manipulation of figures to confuse unsuspecting Nigerians.

“Therefore, we believe that a profitable NNPC can only be possible when the management of NNPC is held accountable and Nigeria gets functional refineries that would bring to an end the current importation of refined petroleum products into the country.

“We’ll continue to insist on an independent forensic audit of NNPC operations from 1999 to date to enable Nigeria to recover all stolen oil revenues, some of which have been declared as unremitted, particularly since 2015”, the CNPP said.