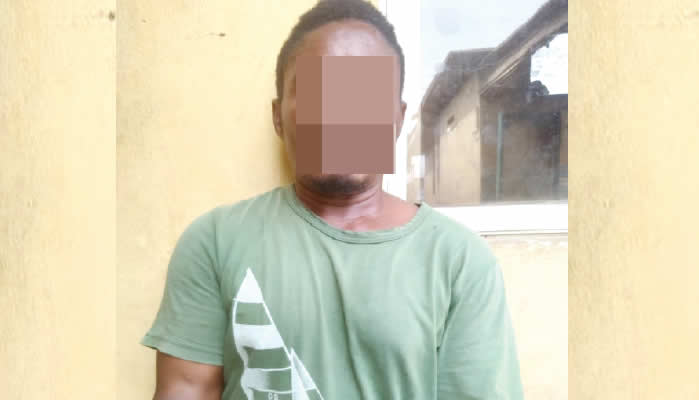 Operatives of the Ogun State Police Command have arrested a 38-year-old man, Daniel Udoh, for allegedly killing one Emaka Umonko, the husband of a woman with whom he was allegedly having a secret love affair.

The suspect was arrested on Friday after he allegedly committed the offence in Onipanu in the Ifo Local Government Area of the state.

The state Police Public Relations Officer, DSP Abimbola Oyeyemi, in a statement on Sunday, said the suspect was arrested following a distress call received by the Onipanu Divisional Police Officer.

He explained that the police were told that the deceased, who had been suspecting Udoh of going out with his wife, confronted him.

The police spokesman said the accusation led to a fight between the two men.

While the fight was on, the suspect, a commercial driver, allegedly brought out a knife and stabbed the victim several times in his back and chest, following which Umonko collapsed.

Oyeyemi said, “Upon the distress call, the DPO, Onipanu division, CSP Bamidele Job, quickly detailed his men to the scene, where the suspect was promptly arrested, and the knife recovered as an exhibit.

“The victim, a welder, was rushed to the state hospital, Ota, but was unfortunately pronounced dead by the doctor on duty.

“The remains of the victim were subsequently deposited at the Ifo General Hospital mortuary for post-mortem examination.”

The PPRO said the state Commissioner of Police, Lanre Bankole, had directed that the suspect be transferred to the Homicide Section of the State Criminal Investigation and Intelligence Department for further investigation with a view to charging him to court. Punch