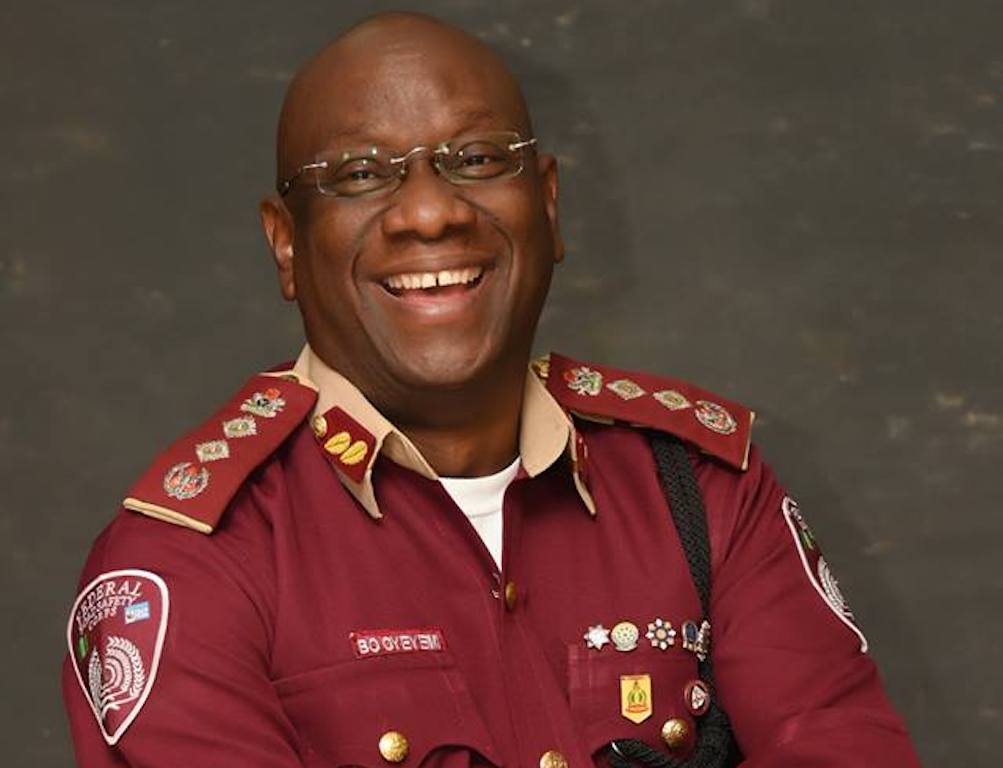 When he was appointed as the first internally groomed Corps Marshal of the Federal Road Safety Corps (FRSC) by former President Goodluck Jonathan on 23rd July 2014, the emergence of Dr Boboye Olayemi Oyeyemi was celebrated widely not only among the staff of the Corps, but stakeholders and members of the public who were conscious of development within the Corps. The wide jubilation that heralded his appointment was borne out of the long expectations of the people that a competent officer with full understanding of the vision and mission of the organization got the opportunity to manage the elite Corps that had earlier earned public trust and got certified with the global certificate of standardisation, otherwise referred to as ISO 9001:2008 for sustained improvement.

Prior to his appointment, Oyeyemi who was one of the few founding officers of the Corps had gained wide ranging experiences spanning all the major departments and commands of the Corps, all of which he excelled in managing without blame. With his robust background in operations, motor vehicle administration, training and policy, research and statistics, which he managed with excellence, all eyes were on the Federal Government to give him the opportunity to showcase the leadership skills he had learnt over the years under successive Corps Marshals.

His emergence was, therefore, not surprising to all those interested in the growth and development of the Corps. Interestingly, he did not disappoint the people as he hit the ground running after his swearing in by the former secretary to the Government of the Federation, Senator Anyim Pius Anyim in the conference hall of the SGF office. An advocate of policy continuity, Oyeyemi had no difficulty in recognising the need to uphold and build on the policy direction taken by his predecessor, Chief Osita Chidoka who had earlier been appointed as a minister and member of the Federal Executive Council.

He announced his management ideals during his maiden strategy session with the principal officers of the National Headquarters and Zonal Commanding Officers when he stated that the principles of his management would be anchored on the tripod of Consultation, Reward and Punishment ( CRP) an acronym for the use of carrots and sticks in managing the affairs of the Corps. As a versatile computer user, Oyeyemi not only promoted the digitization policy of the Corps, but took it to the next level thereby widening the scope, usage and accessibility of computers among the generality of the Corps in the last 8 years that he was saddled with the responsibility of leading the organization.

Having successfully spent his two tenures at the topmost office of the Corps and is graciously bowing out, the questions on the lips of many anxious Nigerians are, what did he do differently that he could be remembered for by the coming generations? Here, we must point out first and foremost that the unprecedented levels of recruitment that he secured from the Federal Government within the years has, no doubt, raised the number of qualified personnel available to carryout specialist and general duty assignments that have significantly improved the presence and visibility of the Corps across the nation’s highways. His policy of ensuring effective management of the wide network of road nationwide has led to the Introduction of Corridor Commands and Station Offices which has made the presence of the FRSC in all the nation’s 774 local governments possible for collective ownership of traffic management as envisaged by the Road Safety Strategy initiative..

Concerned with the poor office accomodation and dilapidated nature of most of the structures occupied by the Corps on rent basis across the ststes, Oyeyemi-led Management vigorously pursued the policy of constructing permanent office accomodation most of which have been commissioned across states in the six geopolitical zones of the country. This has created opportunity for modern and permanent office structures owned by the Corps.

Towards ensuring a happier and more productive post service life for staff, the last man standing unveiled project 20,000 staff Housing Scheme to make house ownership easier for all staff of the Corps while we brought into existence FRSC Post-Service Scheme (PSS) to help members of the Corps save for retirement before the retirement benefit/pension are paid.

Furthermore, the aggressive pursuit of the policy of fleet renewal by his Management has led to the procurement of unprecedented number of operational vehicles, tow trucks, ambulances, administration vehicles and other rescue equipment, the largest ever secured by any management in the 34 years of the Coros’ existence.

As an organization built on the ingredients of knowledge, the FRSC Management under Oyeyemi paid special attention to staff capacity development programmes through which opportunities for local and foreign trainings were offered to all cadres of staff. Further to this, the various institutions of learning aimed at developing the intellectual and road traffic management expertise of the Corps were not only established, but some upgraded to make it possible for them to offer advanced knowledge and certification. To this end, the FRSC Academy Udi, Enugu State was upgraded as centre of excellence for study of road safety and affiliated with the Federal University of Technology, Owerri for the award of post-graduate degree programs in transportation Management.

His Management has been able to successful negotiate and took delivery of an ultra-modern Inspectorate Training School, Owa Alero in Delta State through the benevolence of the government and people of Delta State. 8n addition, he has been able to negotiate and secured the agreement of Plateau State Government to build the Road Marshal Assistant Training School in Shendam, Plateau State, where work is already at an advanced stage. And in his commitment to career development of staff which aligns with the policy of rewarding excellence, the yearly promotion exercise has continued to be observed in the last 8 years of his management thereby creating opportunity for upward movement of the staff in line with available vacancies and strict adherence to the provisions of the federal character principles.

More to the above, Oyeyemi developed transformational initiatives focused on People, Processes and Technology (PPT) that is why today not only does its staff pride as the most disciplined but the Corps stands as the best Information Technology (IT) driven organization in Nigeria with its robust data base and over 95 percentage digitalized administrative and operational procedures.

His administrative ingenuity that led to the deployment of FRSC personnel to Tank Farms has to a large degree, dwindled the rate of crashes associated with articulated vehicles, particularly tankers carrying petroleum products. Through its Safe-to- Load initiative, articulated vehicle have been subjected to checks before they are allowed to load from the various depots across the country with trained personnel of the Corps undertaken routine checks to ensure strict compliance.

Meanwhile, the need for constant education and enlightenment of road users and members of the public on road safety matters as well as conditions of the roads as they move out everyday, led to the establishment of the National Traffic Radio (107.1 FM) Abuja. In the same way, the quest for improved service delivery in the licensing system of the country has led to the establishment of additional Print Farms in the country, while his Management has given impetus to the operational performance of the Corps through the establishment of the operations monitoring and Control Center, procurement and deployment of Body Cameras and establishment of Drivers Proficiency Center at Inspectors Training School, Owa Alero in conjunction with the Delta State Government.

The Corps under his watch, has successfully strengthened inter-agency cooperation with relevant stakeholders such as the National Identity Management Commission (NIMC), National Bureau of Statistics (NBS), Nigerian Customs Service (NCS), all Military and Paramilitary organisations and Banks in Nigeria with evident success in inter agency collaboration and harmonization of data for national development.

Again, it is noteworthy to look at the direction of his leadership’s swift response to the incessant abuse of traffic rules which led to the putting together of the OPERATION COBRA to address certain life-threatening and traffic-related offences. Offenders arrested by the Operation Cobra squad are usually referred to a government health facility for Emotional Stability Test. This step has entrenched compliance and safe road use within the operational areas where the Cobra squad operate.

The subsequent introduction of the body camera by patrol teams will no doubt increase the desire for transparency and evidence based operations that could enhance public trust in the Corps. This will not assist in curbing violence and illegal transaction by personnel while on the highway but will lend credence to the anti-corruption stance of the Corps.

The feat achieved by the FRSC in the last 8 years of Oyeyemi management has led to various local and international recognition and awards that have placed Nigeria’s FRSC as the best example of a road safety lead agency which other governments in developing societies are encouraged to emulate by replicating it in their countries. And with more investments through increased budgetary allocation as well as private sector intervention under the Corps’ partnership initiative and drives, there’s high expectation that the message of road safety will reach great number of people and would impact more on the driving culture of the people towards the envisaged attainment of the goals of safer road environment in the country.

Nigerians that are conscious about the positive developments that have taken place in the Corps in the last 8 years under Oyeyemi-led Management are no doubt convinced that that FRSC has reached a point where its capacity would be able to satisfactorily tackle the challenges of traffic management and safety administration in the country, such that road traffic crashes would not necessarily lead to death.

And as he bows out gracefully after a successful sojourn in the FRSC as the last founding officers that has seen the growth and development of the Corps in the last 34 years 8 out of which he spent as its head, the common refrain is that, Dr Boboye Oyeyemi maybe retiring, but he should not be tired of rendering his services to the nation in whatever areas his expertise could be demanded, even in retirement. By so doing, the nation would stand to continue to derive from his wealth of experience in tackling some of the socioeconomic and security challenges bedvilling this nation and truncating its march to development.

Assistant Corps Marshal Kazeem is the Corps Public Education Officer of the FRSC.