Court Strikes Out Melaye’s Suit Alleging Assassination Plot Against Him 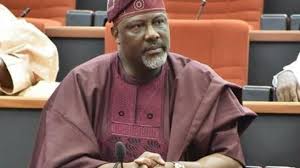 A Kogi State High Court Tuesday dismissed a suit over an attempt on the life of Senator Dino Melaye by five accused persons for want of ”diligent prosecution”.

The suspects include the Chairman, Association of Local Government of Nigeria ALGON, Mr.Taofiq Isa and four others including:  Messrs Ade Obege; Abdullahi Isah; Michael Bamidele and Ahmed Ajayi.

The trial judge, Justice Fola Ajayi, at the hearing lamented that despite four adjournments, the prosecution failed to call their witnesses.

It would be recalled that the embattled Lawmaker in April 2017, approached the court, alleging an assassination attempt on his life by the labour Union Leader and four others.

In his ruling, Justice Ajayi noted that the prosecution counsel could not open his case despite four adjournments.

Consequently, he struck out the case for lack of ”diligent prosecution”. However, he ordered for the prosecution to revisit their case whenever they are so ready.

In effect, Justice Ajayi held that there was no criminal charges against the defendants, thus the suits filed against them were automatically struck out.

The first accused who is also the administrator of Ijumu Local Government Area, expressed delight and described the ruling as “an act of God”.

While affirming that the judiciary was the hope of the common man, Isa declared that he had forgiven his prosecutors and called on all Okun sons and daughters to be united for peace and development to prevail in the land.